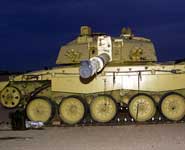 In a time of turbulence and risk, the British armed forces are on a dangerously unsustainable course, a major new Demos report warns.

In a time of turbulence and risk, the British armed forces are on a dangerously unsustainable course, a major new Demos report warns. The men and women of the armed forces are being let down by under-investment. The armed forces have an unfocused brief, insufficiently linked to the threats of the future. The nation itself is divorced from them and their needs.

Stretched budgets remain tied up in big-ticket, high-profile hardware while the ‘software’, the men and women who make up the armed forces are overlooked. Unless pay, terms, housing, training and recruitment are sufficiently resourced, the future for the armed forces looks bleak.

The report’s authors, Dr Timothy Edmunds, senior lecturer in the Department of Politics at the University of Bristol, and Professor Anthony Forster at Durham University, said: "Despite sterling service in Iraq and Afghanistan, UK armed forces are over-stretched, under-resourced and under tremendous organisational strain. It is time for a new, pragmatic and public debate on UK defence; one that is honest about current economic, organisational and societal constraints. It will require a more open-minded and flexible approach from senior military commanders; and a willingness on the part of the government to face up to the contradictions that lie at the heart of British defence policy."

Based on extensive research and consultation, the report analyses the new security challenges from serious and organised crime, international terrorism, religious and ethnic conflict and makes recommendations on how to meet them.

The report is part of a major new series on national security, part of the Demos Security Programme. Charlie Edwards, programme head at Demos said: "We must support those who are currently serving on operations while we remember those who have lost their lives serving this country. Ten years ago this government pledged to invest in our armed forces but politicians and senior commanders have been slow to adapt to changes in the security environment and in wider society. As a result our armed forces are out of step at the beginning of the 21st century.  As any boxer will tell you, you can only punch above your weight for so long."

Commenting on the report, the Royal British Legion said: "While much of Demos’ report is outside our remit, the Royal British Legion warmly welcomes Demos’ new focus on the contribution made by our armed forces, the risks they face on our behalf, and the importance of upholding the nation's Military Covenant with its service people, past and present, and their families."

Out of Step: The case for change in the British armed forces aims to provide an independent analysis of the current situation building on two successful workshops in the first half of 2007 and a series of interviews with serving and retired personnel, policy makers, NGOs and academics.

Demos is the think tank for everyday democracy www.demos.co.uk.