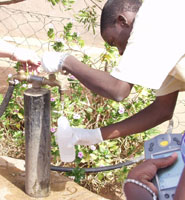 The fight against water-borne disease will receive a major boost thanks to groundbreaking work by an international consortium led by the University of Bristol and supported by a $13 million grant from the Bill & Melinda Gates Foundation.

The fight against water-borne disease – one of the most serious threats to child health in developing countries – will receive a major boost thanks to groundbreaking work by an international consortium led by the University of Bristol and supported by a $13 million grant from the Bill & Melinda Gates Foundation.

The World Health Organization (WHO) has estimated that water-borne disease causes 1.8 million deaths annually, of which 1.5 million are of children under five. Over one billion people lack access to safe water. Most do not even know their water is unsafe and are at risk of potentially fatal diarrhoeal diseases.

The Aquatest project aims to give individuals and communities the information they need to identify unsafe water and to empower them to work towards improvements in water supply.

Aquatest involves a small, hand-held device, similar in concept to the home pregnancy-testing kit. The test results will be displayed as coloured bands and may show, for example, that water is safe for adults to drink but not for children, the elderly or the sick.

Knowing that water is unsafe will encourage treatment before use and motivate changes in water management and sanitation. Accompanying information will include advice on taking action such as chlorinating water, checking for contamination or improving water safety at the communal supply point.

This will be the first off-the-shelf, low-cost and easy-to-use test that will detect the presence of E. coli, the internationally recognised indicator of faecal contamination of water. The sensitivity of the test will enable detection of ten E. coli colonies in 100ml of water – equivalent to finding a single coffee bean in 4,000 Olympic-size swimming pools.

Demand for an inexpensive but reliable water-testing device that ordinary people can use is high in developing countries, not only from governments but also from NGOs and aid agencies. Emergency-relief operations dealing with the aftermath of disasters such as the recent floods in Mexico, the Asian tsunami and the Pakistani earthquake would also benefit from low-skill, dependable water testing carried out on the spot.

The Aquatest project will be led by Dr Stephen Gundry, Director of the University of Bristol's Water and Health Research Centre (WHRC). The University will be leading a large, interdisciplinary team with expertise ranging from engineering, product development and microbiology to consumer preferences and behaviours and water policy and regulation. The research consortium includes WHO and other experts worldwide.

Dr Gundry said: “It is early days, but following a preliminary grant from the European Commission we have now secured support from the Gates Foundation. This will enable the Aquatest consortium to take this project forward and to make a real difference to the lives of a great many people in the developing world.”

It is anticipated that within ten years, low-cost water-testing devices will be in widespread use in 80 per cent of developing countries for water testing by industry professionals, communities and individuals, leading to improved water management and a potential decline in water-borne diseases.