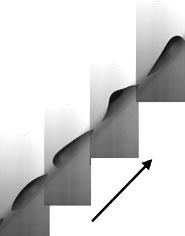 Droplets of liquid have been shown to travel uphill, rather than sliding down as expected, when the surface they are on is vigorously shaken up and down.

Watch a video of a droplet moving uphill. Be patient – it comes back!

Droplets of liquid have been shown to travel uphill, rather than sliding down as expected, when the surface they are on is vigorously shaken up and down.

We are all familiar with raindrops on our wind screens. The small ones stay in place while the big ones roll down the window. This is because surface tension holds the small drops onto the screen until they get to a size where the force of gravity is greater than the surface tension.

But mathematicians at the University of Bristol have shown that the small drops can defy gravity and travel up hill – even on an incline as steep as 85 degrees – if the surface vibrates up and down sufficiently strongly.

Dr Philippe Brunet, in the Department of Mathematics said, “Moving small droplets – such as thousands of spots of DNA arranged on a solid surface (a DNA microarray) – is very difficult as their small size causes them to stick to the surface. So improving our understanding of what causes droplets to move on surfaces will help with this and similar problems.”

The research will be published online this week in Physical Review Letters.

Since the droplet must withstand a fair amount of force, alternately pushing and pulling, it is in danger of breaking apart. Thus the droplet cannot be too large and the fluid has to be a bit thicker than water. Pure water droplets will break apart before the forces are strong enough to cause them to climb. On the other hand, the drops move very slowly if the fluid is too thick.

This method for moving droplets using vibrations may prove useful in understanding the small-scale manipulation of fluids.