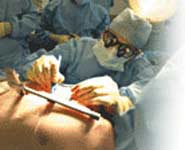 Bristol researchers have identified a heart protection mechanism in mice that surgeons and cardiologists may be able to exploit to improve treatments for patients in future.

Bristol researchers have identified a heart protection mechanism in mice that surgeons and cardiologists may be able to exploit to improve treatments for patients in future.

The research, published in the October issue of the American journal Critical Care Medicine, was funded by the British Heart Foundation (BHF) and conducted by Saadeh Suleiman, Professor of Cardiac Physiology at the University of Bristol, and his colleagues at the Bristol Heart Institute. It describes surprising responses of the heart to mock cardiac surgery in a mouse model. When the heart was stopped and restarted - mimicking the conditions used in most heart bypass surgery - scientists found that hearts with coronary disease from genetically modified mice were more resistant to damage than hearts without coronary disease.

In the study the researchers have introduced a model of coronary artery disease and heart attack by feeding the genetically modified mice (apoE-/-) a high-fat diet typical of people's diets in North America and the UK. Apo E-/- mice fed a normal rodent diet for the same period do not develop coronary disease. The genetic modification in apoE-/- involves changing cholesterol processing, making the mouse prone to fatty build-up in the coronary arteries, similar to human heart disease.

In apoE-/- mice, coronary disease seemed to have "preconditioned" the hearts; they had developed an innate protection against further damage.

This confirms a widely held belief that in certain patients who have survived a heart attack, the heart may become naturally preconditioned against further damage, and that when treating patients with coronary disease, surgeons and cardiologists have an advantage that can be further exploited to protect the heart. The team at the Bristol Heart Institute, based in the Bristol Royal Infirmary, is currently using this model to investigate the basis of this internal protective phenomenon in order to formulate strategies to protect hearts with coronary disease.

An exciting observation was also made when normal mice were fed the same Western-type high-fat diet. These mice do not develop coronary disease and their hearts appear to function normally. However, when hearts from these mice were starved of blood supply - such as in a heart attack or during surgery - they were found to be much more vulnerable to injury than hearts of similar mice fed normal diet. This is in complete contrast to the disease-prone animals and suggests that Western style high-fat diet can significantly weaken the internal defences of the otherwise normally working heart and render it vulnerable to any sudden stress. Therefore the Western-style diet is truly ugly for disease prone hearts and it is also bad for healthy hearts.

Professor Suleiman said: "We have shown that in mice prone to developing coronary artery disease, a Western-style diet accelerates the progression of disease but that hearts with coronary disease then became more resistant to further damage, such as occurs during surgery. But it is still better to avoid surgery altogether by adopting healthy eating habits!"

Professor Jeremy Pearson, Associate Medical Director of the BHF added: "These findings take an important step towards untangling the heart's complex protective mechanisms, which will help researchers devise treatments to reduce the risks for patients during heart surgery."

The Bristol Heart Institute consists of over 200 researchers and clinicians in the University of Bristol and Bristol NHS Trusts. As well as improving collaboration between scientists and clinicians within the Institute, the aim is to communicate research findings to the public.