BSL language recordings to be computerised 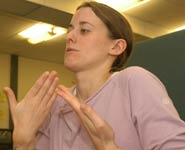 A grant of £1.2 million to create an innovative computerised collection of language recordings of British Sign Language (BSL) has been awarded by the ESRC to the University of Bristol, University College London, Bangor University, Heriot-Watt University and Queens University Belfast.

A grant of £1.2 million to create an innovative computerised collection of language recordings of British Sign Language (BSL) has been awarded by the ESRC to the University of Bristol, University College London, Bangor University, Heriot-Watt University and Queens University Belfast.  The project, led by UCL, will also study aspects of the vocabulary, grammar and sociolinguistics of BSL.

Data will be collected from the British deaf community from at least 240 native and near-native deaf signers of BSL from eight locations across the United Kingdom.

The collection will be as representative of the language community as possible, with a balance of men and women, deaf adults with deaf parents and those with hearing parents, signers who are young and old, and individuals from working and middle class backgrounds and different ethnic groups.

The aim of the project is to create a central source of data for ongoing research to understand BSL and sign languages of deaf communities in general.

The project will also use the data collected to investigate variation and change in the phonology, vocabulary and grammar of BSL and relate it to social factors, such as a signer's regional background, age or social class.

Finally, researchers hope to use a subset of 100,000 signs to find out which signs are the most common in conversation.  Comparative work on Australian Sign Language will be incorporated into the project so that the relationship between these two historically related languages will be better understood.  The project will also compare variation in BSL with American Sign Language and other unrelated sign languages to improve the understanding of sign languages in general.

Dr Rachel Sutton-Spence, Senior Lecturer in Deaf Studies at the University of Bristol’s Centre for Deaf Studies and a co-investigator on the project, said: “We are delighted with the grant.  The data collection and annotation for this project will provide the first national web-based and publicly accessible BSL collection that will become essential for sign language research and teaching in the years to come.”

Sign languages like BSL exist in unique sociolinguistic situations. Only five to ten per cent of the British deaf community acquire BSL as their first language from signing parents, with the majority of signers learning BSL from deaf peers in schools for deaf children or from friends in early adulthood.

As a result of this unusual pattern of language transmission, together with other factors such as the lack of a widely used writing system or standard variety of BSL used in education and extensive contact with the spoken language of the surrounding community, sign language use in the British deaf community exhibits a great deal of variation. Since the 1980s, the increasing use of BSL on television and in a wider variety of social situations means that the vocabulary (and perhaps the grammar) is undergoing rapid change.

British Sign Language is the language used by the Deaf Community in the UK. Its roots go back nearly 500 years and it is a complete language, in terms of grammar and vocabulary.