Nice but naughty – our addiction to chocolate 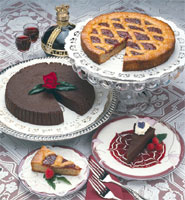 The evidence as to whether chocolate can really become addictive is examined by Professor Peter Rogers from the Department of Experimental Psychology. His talk can be heard at 9.30 am on Tuesday 11 September at the BA Festival of Science in York.

Chocolate is the most widely and frequently craved food. People readily admit to being ‘addicted to chocolate’ or willingly label themselves as ‘chocoholics’. A popular explanation for this is that chocolate contains mood-enhancing (psychoactive) ingredients that give it special appeal.

Evidence and logic, however, find little support for this. Substances present in chocolate which have been highlighted as potentially pharmacologically significant include serotonin, tryptophan, phenylethylamine, tyramine and cannabinoids. However, many of these compounds exist in higher concentrations in other foods with less appeal than chocolate.

Professor Peter Rogers, from the University of Bristol, explains: “A more compelling explanation lies in our ambivalent attitudes towards chocolate – it is highly desired but should be eaten with restraint (nice but naughty). Our unfulfilled desire to eat chocolate, resulting from restraint, is thus experienced as craving, which in turn is attributed to ‘addiction’.”

A further observation is that the most widely preferred chocolate is milk chocolate and chocolate-covered confectionery. These contain a lower amount of cocoa solids, and therefore a lower concentration of potentially psychoactive compounds, than ‘dark’ chocolate which is not so widely craved.

It is therefore far more plausible to suggest that a liking for chocolate, and its effects on mood, are due mainly to its principal constituents, sugar and fat, and their related orosensory and nutritional effects.

The evidence as to whether chocolate can really become addictive is examined by Professor Peter Rogers from the Department of Experimental Psychology, University of Bristol. His talk can be heard at 9.30 am on Tuesday 11 September at the BA Festival of Science in York.

This work is expanded in the chapter by Peter Rogers in "Food cravings and addictions – fact and fallacy" published in Nutrition and Health: Current Topics 3, edited by Tanya Carr and Koen Descheemaeker, published by Garant, Antwerp, 2003.
Please contact Cherry Lewis for further information.