New Mars lander about to launch 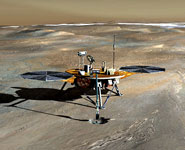 NASA’s new Phoenix lander is due to launch for Mars next week where it will probe the arctic landscape searching for conditions favourable for past or present life.

NASA’s new Phoenix lander is due to launch for Mars next week where it will probe the arctic landscape searching for conditions favourable for past or present life. UK scientists from the University of Bristol and Imperial College London have provided hardware and are involved in the science operations.

The launch is scheduled for 1035 am GMT on 3 August (3 week launch window) with the spacecraft starting its journey onboard a Delta II rocket from Cape Canaveral, Florida.

Phoenix will descend and land on the red planet’s northern plains, in the area known as Vastitas Borealis, in May 2008, where it will claw down into the icy soil. Once Phoenix  is on the surface, there will be  three months for the scientists to complete their tasks before the Martian winter sets in and the solar panels no longer provide enough power to run the instruments.

One of the objectives of Phoenix is to monitor the polar weather and the interaction of the atmosphere with the surface. Dr David Catling from the University of Bristol, who will be attending the launch, will be studying this relationship in detail.

He explains, “The polar atmosphere during summer is a different environment compared to that visited by previous landers. The sun is always above the horizon and so heats the surface and atmosphere throughout the day. As a consequence the polar summer time atmosphere is not subject to the huge daily temperature swings that are experienced at lower latitudes. Northern summer is also the time of year when water vapour is driven off ice at Mars’ north polar cap and enters the atmosphere.

Catling adds, “The present is often a key to the past. In studying the movement and behaviour of water on present day Mars, we can better understand how it may have behaved previously. In the past, Mars experienced big ice ages when water ice extended into the tropics and probably melted in some places, providing possible habitats for life.”

Professor Keith Mason, CEO of the Science and Technology Facilities Council, who support the UK involvement in the mission said, “Mars continues to intrigue and amaze us and by landing on the northern plains Phoenix will give us an insight into the icy world beneath, furthering our quest to find out whether conditions exist for past or present life on Mars.”

The mission represents the first attempt to actually touch and analyse Martian water in the form of buried ice. The spacecraft will investigate whether frozen water near the Martian surface might periodically melt enough to sustain a habitable zone for primitive microbes.  In order to accomplish this and other key goals Phoenix will carry the most sophisticated set of advanced research tools ever used on Mars, including a robotic arm, camera, surface stereoscopic imager, thermal and evolved gas analyser, a microscopy, electrochemistry and conductivity analyser, a meteorological station and a Mars descent imager.

Dr Tom Pike heads up the Phoenix team from Imperial College London. They have provided micro-machined silicon substrates which provide a surface on which to hold the dust and soil samples for analysis in the microscope station attached to the Phoenix lander. The grains of Martian dust and soil, delivered by a mechanical excavating arm, will be imaged by an optical microscope and an atomic force microscope. Together they will provide the highest resolution of imaging ever taken on another planet.

Dr Pike explains, “Nobody has looked at Mars at this type of resolution before. It is very difficult to predict what we might find, but if you wanted to look for the earliest forms of past or present life we will be the first to look closely enough.”

The team has been conducting trials on a replica of Phoenix’s microscope station based at Imperial College London. They have been using the equipment for several months to work out the best way of studying the Martian soil.