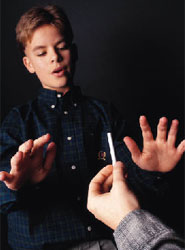 Many smokers excuse their habit by claiming that smoking relieves their feelings of stress. In fact, the stress they feel may just be one of the short-term symptoms of withdrawal, if they haven't smoked for a while.

Many smokers excuse their habit by claiming that smoking relieves their feelings of stress. In fact, the stress they feel may just be one of the short-term symptoms of withdrawal, if they haven't smoked for a while.

To investigate the effects of smoking on stress, Dr Marcus Munafo and research colleagues at the University of Bristol, will be inducing short periods of subjective stress and anxiety in smokers. The study participants will be healthy cigarette smokers who smoke their first cigarette of the day within 60 minutes of waking up.

Dr Munafo has been given a prestigious Young Investigator Award by NARSAD, the Mental Health Research Association in the United States, to carry out this research.

The inhalation of air containing a higher concentration of carbon dioxide than normal has been shown to lead to short-term increases in subjective stress and anxiety. This is because breathing air enriched with carbon dioxide activates a region of the brain, called the HPA axis, involved in the body’s stress response.

Dr Munafo and his colleagues have developed the inhalation of CO2 as a novel method to test the response of smokers when smoking and when abstaining from smoking. This project may lead to therapies to help relieve the stress and depression caused both by smoking and smoking withdrawal, and perhaps aid in smoking cessation.

Dr Munafo said: “The CO2 inhalation method has proved to be a very reliable way of modelling stress and anxiety in a laboratory. This funding represents an exciting opportunity to look at the role that cigarette smoking plays in the response to stress”.

Constance E. Lieber, president emeritus of NARSAD, said; “The young scientists whom NARSAD chooses to support represent the very best in their respective areas of expertise and have been judged by our Scientific Council as having developed innovative and promising research programmes”.

NARSAD created the Young Investigator Award to help the most promising scientists who are now entering research to generate pilot data necessary for obtaining larger grants.

Healthy smokers who smoke their first cigarette within 60 minutes of waking up, and who are interested in taking part in this research, should contact Angela Attwood either by e-mail (angela.attwood@bristol.ac.uk) or telephone (0117 3317898) for further information.