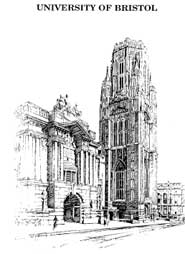 The 200th anniversary of the abolition of the slave trade in the British Empire is the inspiration for a gathering of more than 300 Romantic Studies experts from around the world in Bristol this week.

The 200th anniversary of the abolition of the slave trade in the British Empire is the inspiration for a gathering of more than 300 experts from around the world in Bristol this week.

The experts, members of the British Association for Romantic Studies (BARS) or the North American Society for the Study of Romanticism (NASSR), will explore the theme of Emancipation, Liberation, Freedom at a four day conference at the University’s Wills Memorial Building and events across the city.

Professor Nick Groom of the University of Exeter (Cornwall), acting Director of the Centre for Romantic Studies and organizer of the event, said: “2007 is a year of significant anniversaries in Romantic Studies, including the  250th anniversary of the birth of William Blake, 200 years since the publication of Wordsworth's Poems in Two Volumes and, of course, the 200th anniversary of the abolition of the slave trade.

“Bristol, with its twin heritage of both slave trade and Romantic poetry, offers the natural place to host the event.  One of the aims of the conference is to introduce delegates to the city of Bristol and its surroundings, and so in addition to the Wills Memorial Building, events will be taking place in the City Museum and Art Gallery and the Empire and Commonwealth Museum, and there will be a conference trip to Tintern Abbey, scene of Wordsworth's famous poem.”

The terms ‘Emancipation’, ‘Liberation’, and ‘Freedom’ have significant and overlapping resonances in the Romantic period, reaching across a range of disciplines including philosophy, history, art history, music, aesthetics, political theory, legal theory, and European literature.

The conference is supported by the Bristol Institute for Research into the Arts and Humanities (BIRTHA), under the BIRTHA Conference Scheme.