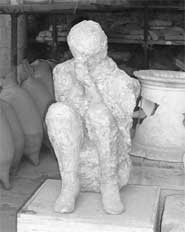 The victims of the Pompeii disaster have provided unusual inspiration for almost three hundred schoolchildren as part of an ongoing research project at Bristol University.

The victims of the Pompeii disaster have provided unusual inspiration for almost three hundred schoolchildren as part of an ongoing research project at Bristol University.

The Casts Project, which aims to explore what the Roman disaster means to us today, invited schoolchildren from across the country to enter a competition to create artworks inspired by the famous Pompeii casts.  Five images were posted on the project website showing casts of some of the people who died in the Roman city following the devastating eruption of Vesuvius in August 79AD.

The 14 and over category was won by a poem by Emily Wright from Newcastle High School.  The second prize was awarded to Julia Loveless of Redland High School, Bristol for her model of a dying Pompeian.

The winners in the under 14 category were Farah Fatimah and Jessica Thomas from Queen Anne’s School, Caversham who created a model of a famous cast made from a dog who died in the eruption and Eleanor Sanger from King’s High School, Warwick who wrote a short story.  The cash prizes were generously provided by the University of Bristol Alumni Foundation.

Dr Shelley Hales of Bristol University’s Department of Classics and Ancient History said: “We had an overwhelming response to the competition and final decisions were very difficult due to the high quality of the entries.  These included stories, poems, essays, collages, models, sculpture, paintings, casts, plays, songs, broadcasts and Powerpoint presentations and have provided excellent material for thinking about what the victims of Pompeii mean to us today.”

The Casts Project is part of a wider research exercise at Bristol, Liverpool and Exeter universities which aims to explore the importance of Pompeii and its inhabitants in our imaginations of the Roman past, to question whether Pompeii matters today and to ask how we should treat the city and the remains of the people who died there.  Should we encourage sentimental connection or look on as objective, scientific observers?

Dr Hales said: “In the 250 years since excavations began, Pompeii has became a major source of inspiration to western imaginations.  The site, and the novels, films, paintings, exhibitions, souvenirs and guide books it inspired throughout the last two centuries brought antiquity into the public sphere of knowledge.

“More recently, whilst the physical state of the site itself has reached a critical state of decay, a surge of popular interest in Pompeii, a prototype ground zero, has seen the city, as imaginative tool, model of disaster and tourist hotspot, reach a wider audience than ever before.”

The competition winners will receive their prizes at a conference, entitled Ruins and Reconstructions: Pompeii in the Popular Imagination, taking place at Bristol this week.

The conference brings together academics studying the Roman city with practitioners who have tried to bring Pompeii to life in media such as novels, painting, photography, documentary and journalism.  Speakers include the writer Lindsey Davis who has written a number of novels set in Ancient Rome.

Ruins and Reconstructions: Pompeii in the Popular Imagination runs from Tuesday 17th to Thursday 19th July at Clifton Hill House.  The conference is sponsored by Bristol Institute for Research in the Humanities and Arts (BIRTHA).