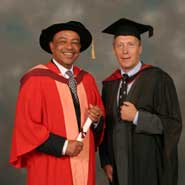 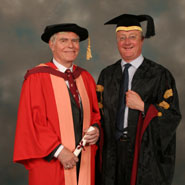 The Right Honourable Paul Boateng, High Commissioner to South Africa and a Bristol graduate, will be honoured with the degree of Doctor of Laws at the 11.15 am ceremony.

The degree is in recognition of his distinguished political and diplomatic career.

In 1966, after a coup overthrew the Nkrumah regime, the Boateng family were forced to flee Ghana. They came to the United Kingdom, the birthplace of Paul’s mother. After winning a place at the University of Bristol to read Law, Paul became an active member of the Student Council and spent time using his skills and commitment in St Paul's, an inner suburb of Bristol with a large African-Caribbean population.

After graduation in 1976, he began working as a trainee solicitor at Birnbergs, the trade unionist and civil liberties solicitors’ firm in London, and later trained as a barrister.

In 1981 he was elected to the Greater London Council. He also chaired its police committee and was vice-chairman of its ethnic minorities committee.

He entered parliamentary politics as Labour MP for Brent South in 1987. In 1989 Neil Kinnock appointed him a shadow junior Treasury spokesman. In 1992 he became Shadow Minister for the Lord Chancellor’s Department, a post he held until the 1997 General Election. In May 2002 he became the first non-white Cabinet Minister in the nation’s history when Tony Blair made him Chief Secretary to the Treasury.

Stuart Goldsmith, Chairman of Bristol University's Convocation and a graduate of the University, will be honoured with the degree of Doctor of Laws at the 2.30 pm ceremony.

The degree is in recognition of his service to the University and its Convocation.

After graduating in 1966, Stuart started his career as an investment analyst at the stockbrokers, Joseph Sebag & Co.

By the age of 32 he was Chief Executive of a small quoted company and within eight years of graduating he was Managing Director of the fund management division of Britannia Arrow Holdings, with over 400 employees and with subsidiaries in London, Jersey, Boston and Denver. He was also Director of ten offshore investment companies and 12 US investment companies and managed over £4 billion.

At the age of 40, he left Britannia Arrow and formed his own successful financial services company.  When it was taken over, Stuart formed and became Chairman of Ketton Securities, a corporate finance firm that advises on corporate and investment strategies, finance raising, mergers and acquisitions.

Stuart has worked hard to develop Convocation into the 21st century and is heavily involved in new changes to its structure so that it can best help the University in the future and especially over its centenary in 2009.

Stuart has been very committed to Convocation’s constitutional role and ensures full engagement at the annual meeting of Court. As part of that role, he has been a very active and supportive member of University Council and has served on a great many of its committees.

An honorary degree is a major accolade, awarded in recognition of outstanding achievement and distinction in a field or activity consonant with the University’s mission.
Please contact Caroline Clancy for further information.