Jazz in the tropics 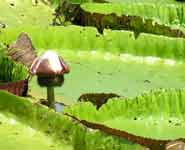 Bristol University’s Botanic Garden will officially open its Tropical Zone glasshouse on Saturday 28 July. To celebrate the occasion, the garden will he holding a Summer Jazz Evening.

Bristol University’s Botanic Garden will be going tropical when it officially opens its Tropical Zone glasshouse on Saturday July 28.  To celebrate the opening, the garden will be holding a Summer Jazz Evening on the same day.

There will be a tour of the new garden in the afternoon, which will culminate in the official opening of the Tropical Zone - a hot, humid glasshouse environment, home to the Giant Amazon Water Lily and many other exotic plants.

The Giant Amazon Water Lily, the Victoria amazonica, is the largest species of water lily.  It has circular leaves that can reach three metres in diameter with a 15-centimetre rim.  It is naturally found growing in the slow backwaters and seasonal lagoons of the Amazon region.

The Blue Note Jazz Band, fronted by Hannah Wedlock, will play during the evening and there will be a plant auction, bar and raffle.

Bring your own picnic, cushion and umbrella, if wet, and enjoy the emerging garden. Proceeds from the event will go towards the Friends of the Botanic Garden, a registered charity set up to support the Botanic Garden and its work.

“We look forward to welcoming everyone and introducing them to the Giant Amazon Water Lily and the other exotic plants growing in our new Tropical Zone.  There are lots interesting plants to see, a lovely garden to enjoy and I am sure it’s going to be a great evening.”

Tickets priced £9 are available in advance by telephoning John Leach on 01275 854992 or by sending a cheque made payable to Friends of Bristol University Botanic Garden, together with an A5 SAE, marked Summer Jazz Evening, to University of Bristol Botanic Garden at The Holmes, c/o Waltham Cottage Yard, Hollybush Lane, Stoke Bishop, Bristol BS9 1JB.

The Summer Jazz Evening will take place on Saturday, July 28. The garden will be open from 4 pm, with the tour of the garden taking place at 4.30 pm, culminating in the official opening of the ‘Tropical Zone’ glasshouse at 5.45 pm. The jazz evening will start at 7 pm and finish at 9.30 pm.

The Botanic Garden has the largest water lily species, the Victoria amazonica. The Victoria amazonica has circular leaves that can reach 3 m in diameter with a 15 cm rim. It is naturally found growing in the slow backwaters and seasonal lagoons of the Amazon region.

The flowers, which open at dusk and only last two nights, are pure white when they emerge, turning plum purple on maturity and emit a delicious fruity fragrance. They are pollinated by beetles, which find the flowers irresistible.

When plants are in full growth they can stand the weight of a small child if evenly placed upon the leaf.

By mid-summer the Botanic Garden’s Victoria amazonica should be looking at their best.

The new Botanic Garden, unique in the Bristol area with its huge diversity of plants opened to the public in March 2006. The garden has been designed with a strong evolutionary theme with four core collections: Evolution, Rare and Threatened Natives, Mediterranean Plants and Useful Plants.

Laid out in exciting displays the garden includes an evolutionary dell, a phylogeny display, Chinese and European Herb Gardens, a rock garden, a pool surrounded by native plants, together with a large glasshouse divided into four climatic zones; Sub Tropical, Warm Temperate, Cool and the Tropical zone.

The University Botanic Garden at the Holmes is open to the public on Wednesday, Thursday, Friday and Sunday from 10 am to 4.30 pm. The garden will also be open on Saturday, 28 July and Saturday 4, 11, 18 August with more ‘open Saturdays’ planned.