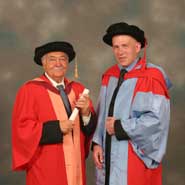 Image of Mr Pasquale Pistorio and Professor David May 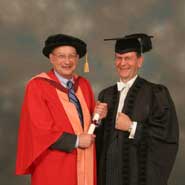 Image of Lord Sainsbury of Turville and Mr Derek Pretty

Mr Pasquale Pistorio, former President and Chief Executive Officer, STMicroelectronics, will be honoured with the degree of Doctor of Engineering at the 11.15 am ceremony.

The degree is in recognition of his contributions to the microelectronics industry.

Today the company is the fifth largest microelectronics company in the world, employing 50,000 people working across four continents and with an annual turnover of nearly $10 billion, sustaining its technology and innovation with an annual R&D investment of $1.6 billion.

Pasquale has received many honours, including Italy's Cavaliere del Lavoro and France's Officier de la Legion d'Honneur alongside awards such as the Green Hero Lifetime Achievement Award. Since retiring as Chief Executive of STMicroelectronics, he has become its Honorary Chairman. He sits on numerous boards including that of Telecom Italia, and advises the Italian, French and Singapore governments.

Lord Sainsbury of Turville, businessman, politician and champion of science in universities, will be honoured with the degree of Doctor of Laws at the 2.30 pm ceremony.

The degree is in recognition of his success as a leader in business, the arts, science, philanthropy, politics and public service.

Lord Sainsbury is also the patron of Bristol Neuroscience, which supports the University in maintaining and developing Bristol as a world-class centre for research into the nervous system and the development of new treatments for neurological disorders and disease.

In his capacity as Minister for Science, Lord Sainsbury has been a great supporter and champion of research and enterprise in ways that have had a direct and visible impact on the University of Bristol as well as higher education in general.