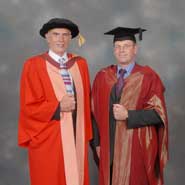 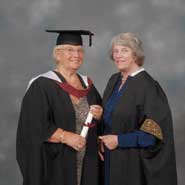 Professor David Milne, OBE, former Chief Executive and Founder of Wolfson Microelectronics plc and a Bristol graduate, will be honoured with the degree of Doctor of Engineering at the 11.15 am ceremony.

The degree is in recognition of his success in turning Wolfson Microelectonics into a world leader in digital technology.

Wolfson Microelectronics design the technology for the digital market. The company has grown rapidly to become a global brand with a market value of $1 billion. In 2006 it achieved over $200 million revenue.

Wolfson Microelectronics was nominated as the best new company to join the London market in 2004 and won the Best Technology Award for a British plc in 2005.  It has also received two Queen’s awards for innovation and export.

Mrs Marg Longman, Convenor, University Branch, TGWU Transport and General Workers’ Union and member of University staff from 1976 to 2005, will be honoured with the degree of Master of Arts at the 2.30 pm ceremony.

The degree is in recognition of her outstanding efforts, that span over 25 years, representing the University’s manual staff in relations with the University.

Marg represented around 800 of the University’s manual staff.  Through her persistence, University of Bristol manual workers eventually received a permanent local supplement to their hourly rates of pay. Bristol University was and is the only HE institution in the country to have introduced such a measure.

Under her influence, Bristol University became acknowledged within her union as a model of successful industrial relations and fair treatment of its staff.

An Honorary Degree is a major accolade, awarded in recognition of outstanding achievement and distinction in a field or activity consonant with the University’s mission.