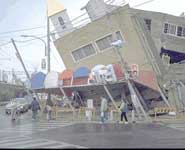 A building following the earthquake in Kobe, 1995 Adam Crewe

Pupils from a local school together with a school from Slovakia will put their engineering skills to the test at the University of Bristol's Earthquake Engineering Research Centre (EERC) this Thursday [July 12].

Pupils from a local school together with a school from Slovakia will put their engineering skills to the test at the University of Bristol's Earthquake Engineering Research Centre (EERC) this Thursday [July 12].

All 230 pupils in Year 9 (aged 13-14) at St Peter's High School, Gloucester, have been working in teams to design and construct small-scale model buildings using MDF (medium density fibre) board, paper, string and glue.  The models have to stand up to artificial earthquakes generated on the shaking-table in the University's Earthquake and Large Structures laboratory.

The school have been preparing their materials and planning their designs for over a month using the University's IDEERS (Introducing and Demonstrating Earthquake Engineering Research in Schools) to get advice on how engineers design earthquake-resistant buildings.

Dr Wendy Daniell, a research fellow in the University's Department of Civil Engineering, and who developed the challenge with Dr Adam Crewe, visited the school last month to introduce the project to the pupils and to give them some background knowledge on earthquake damage and techniques for protecting buildings.

The school have run the challenge as a cross-curricular project during normal lessons for Science, Maths, Geography and Design and Technology.  Teachers were briefed on the project in May by Dr Daniell during an INSET Professional Development session.

St Peter's have also partnered with a school from Bratislava, the capital of Slovakia, and a group of pupils who have been working on their models in Bratislava will be visiting the UK to join the St Peter's pupils for the final tests.  In total, 60 pupils will bring the best 16 models to the University to be tested on the shaking-table.

Dr Daniell said: "It is very exciting for us that the school has taken on our challenge as a cross-curricular project, as it demonstrates to pupils the wide range of skills and knowledge required by civil engineers in developing creative solutions to problems experienced by vulnerable communities in seismically active regions.  It also demonstrates the value of planning, team working and other key skills that pupils are required to develop.

"We hope that some of these young people will be sufficiently enthused by the project to take up Maths and Science at A-level and to consider engineering as a degree option."

This project is being funded by a Royal Society Partnership Grants scheme which aims to support teachers working with engineers or scientists.  Cash prizes for the strongest building, the most innovative model and the best team are being sponsored by British Energy.  The University's Widening Participation Office has also sponsored the project by paying six civil engineering undergraduates, as Student Ambassadors, to assist the pupils in school with the design and construction of their models.

At first the models will sway gently as they experience very small earthquakes.  Gradually, the magnitude of the earthquakes will be increased, shaking the models violently and eventually causing them to collapse.  Through this experience, students will learn how buildings behave during earthquakes and why some of them fail.

Last week St Peter’s High School was visited by the British Association for the Advancement of Science (BA) CREST Award team who awarded 153 bronze awards and 52 silver awards to students. BA CREST is a nationally recognised accreditation scheme for project work in the fields of science and technology. Aimed at students, aged 11-19, BA CREST awards encourage students to develop their scientific curiosity, problem-solving and communication skills.

The awards were presented on [Wednesday, July 4] at the Gloucestershire CREST Award Ceremony. St Peter’s High School’s Y9 Earthquake Project won the Tony Wilkes CREST Award for Excellence presented for innovation, achievement at the highest level, and enthusiasm and endeavour. Tony Wilkes was a founder member of the Gloucestershire CREST Steering Group.