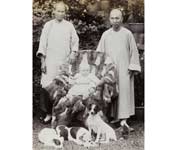 A British child with family servants in the Chinese city of Foochow, this dates from c.1900 J.C. Oswald Collection, see chp.ish-lyon.cnrs.fr/

Since the inaugural conference held at the Institute of Commonwealth Studies, London, in 1998, academics from around the globe have been exploring a number of themes, issues and arguments in an attempt to define a working concept of the British World.

Following the first meeting there have been four more conferences, in Cape Town (2002), Calgary (2003), Melbourne (2004) and Auckland (2005). These conferences took a broad approach, debating themes such as migration, identity formation and competing forms of what it means to be ‘British’ in the dominions.

Robert Bickers, Professor of History in the Department of Historical Studies at Bristol University and a member of the conference organising committee, said: “The main objective of this year's conference is to reflect on what has been done to date, provide opportunities for developing new research agendas and, most importantly, to continue to map and define what is meant by the British World.”

Researchers believe that the British World was not held together simply by sentiment, a common heritage and shared institutions. It was also bound together by networks ranging from family and community affiliations, commercial and professional associations and educational and religious groups to philanthropic and scientific organisations.

Conference chair Dr Kent Fedorowich from UWE said: “Since the first British World conference at the Institute of Commonwealth Studies in London in 1998, scholars from around the globe have tried to create a working concept of the ‘British World’ - a concept that extends far beyond the physical confines of those regions on the map that were once painted red.”

The conference is being hosted at Bristol University by the Centre for the Study of Colonial and Postcolonial Societies.  Both collaborating universities have given generous support to the event, as have a variety of UK funding agencies including the Economic History Society, the Royal Historical Society, the Arts and Humanities Research Council and the British Academy.

Keynote speakers at the conference include:

John Darwin, Beit Lecturer in the History of the British Commonwealth, Nuffield College, Oxford University: The British Empire and the ‘British World’

Andrew Thompson, Professor of Commonwealth and Imperial History, University of Leeds: A ‘Cultural Economy’ of the British World, c.1850-1914

Antoinette Burton, Bastian Professor of Global and Transnational Studies, University of Illinois (Urbana-Champaign): Gender, Anglo-American Empire and the Cosmopolitan Expert: The Postcolonial Careers of Santha Rama Rau, 1945 to the present

Saul Dubow, Professor of History, University of Sussex: How British was the British World: The Case of South Africa

Bill Waiser, Professor of History, University of Saskatchewan: From Many Peoples Strength?’: the myth of multiculturalism in the Canadian prairie west, 1900 to 1950