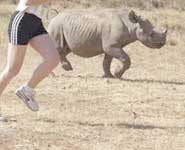 Twelve Bristol people will be putting on their running shoes this weekend [Saturday, June 23] for a project in Africa.

Twelve Bristol people will be putting on their running shoes this weekend [Saturday, June 23] for a project in Africa.

Staff and students from the University of Bristol will join other members of Team Bristol to take part in the eighth Safaricom Marathon and Half Marathon to raise funds for a community sport project at a school in Lewa, Kenya.

The marathon, one of the ten toughest marathon events in the world, is run on dirt roads, over a 42km route (21km for the half-marathon) through the Lewa Wildlife Conservancy .

What makes this race unique is that it is the only marathon in the world run within a wildlife game reserve and located at an altitude of 5,500 feet above sea level.

The four runners include member of staff, Karen Harvey from the University's Centre for Sport, Exercise and Health and three students, Richard Williams, Oli Mott and Nick Young.

Karen Harvey, Community Sport Development Manager, said: "The team have raised over £8,000 and we hope to have reached our £10,000 target by the time we return from our fundraising trip.

"This is going to be an unforgettable experience.  Especially with the amazing setting we will be running in and who knows we might have zebra, impala and giraffe running alongside us."

Team Bristol, led by the Bristol Half Marathon Technical Director Ray Jaekels, is a group of 12 people, including representatives from Bristol City Council and the Bristol Evening Post.

Anyone wishing to make a donation to Team Bristol can go to www.justgiving.com/teambristol