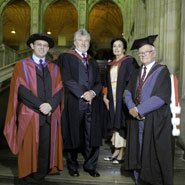 A special degree ceremony to mark the 60th anniversary of the establishment of the Bristol–Bordeaux and Bristol–Hannover twinning associations will be held at 12 noon today [Friday 15 June] in the Wills Memorial Building, University of Bristol.

A special degree ceremony to mark the 60th anniversary of the establishment of the Bristol–Bordeaux and Bristol–Hannover twinning associations will be held at 12 noon today [Friday 15 June] in the Wills Memorial Building, University of Bristol.

The University is to award the honorary degree of Master of Arts to both Mme Arlette Izac, MBE, Présidente of the Bristol–Bordeaux Association and Herr Horst Josch, Hannover Chairman of the Bristol–Hannover Association (from 1982 to 1999), for their contributions to the twinnings between Bristol and these two of its European partner cities.

Arlette Izac first came to Bristol to take part in the Schools Exchange in its very early years. After many years of helping to run the exchange as accompagnatrice and organiser, she became overall chairman or Présidente of the Association Bordeaux-Bristol in 1990.

The exchange visits provided her with a first-hand knowledge of the Bristol secondary school system, particularly at Fairfield Grammar School and later at Merrywood Girls' Grammar School. The experience also helped determined her own career. She became a teacher of English at Lormont outside Bordeaux and an English language adviser to the Ecole Normale at Bordeaux.

Mme Izac’s contribution to the continued success of this important relationship has already been recognised by the award of an MBE, received by her at the British Consulate at Bordeaux in 1997.

Horst Josch’s career has been similarly dedicated to the service of his community, and to preserving and extending the much wider community of interest and human bonds which have linked Bristol and Hannover since 1947.

Herr Josch served for almost 18 years as First Chairman of the partner organisation in Hannover, the Hannover-Bristol Gesellschaft (Society) and as Deputy Chair for several years after that.

During his time as Chairman of the Society, Herr Josch attended all twinning events and ensured there were sufficient funds to support the numerous activities undertaken by the Society. He also attended classes to master the English language.

His love of rugby, a sport in which he has competed around the world, proved a particular benefit to the twinning link, notably through the Bristol-Hannover Sporting Exchange, which has remained one of the key events in the annual twinning calendar.

Her Josch brought his rugby team from the Hannover Odin club to play in Bristol over many years, and arranged return trips. Strong links were established in this connection with the Queen Elizabeth Hospital School in particular.

For very many years, people from Bristol have travelled to Hannover to take part in sports tournaments, their counterparts making the return trip the following season. Herr Josch ensured there were opportunities for young people to engage in the exchange across a wide range of such disciplines, and that even very young children were involved.

The achievement of Horst Josch and others in running the Sporting Exchange has been to demonstrate the unifying potential of sport, an international language, which has set up lasting friendships between individuals in the two cities.

Herr Josch remains an active member of his community in Hannover, organising junior rugby leagues, and he has recently spent four years as Chair of the Hannover Sporting Association.