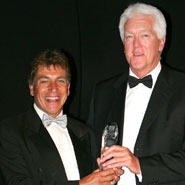 A sports coach at the University of Bristol has won a prestigious BUSA (British Universities Sports Association) ‘Coach of the Year’ award for his dedication to University sport.

A sports coach at the University of Bristol has won a prestigious BUSA ( British Universities Sports Association) ‘Coach of the Year’ award for his dedication to University sport.

Gordon Trevett, High Performance Manager at the University's Centre for Sport, Exercise and Health has coached the University’s successful rowing team for the past four years and helped many rowers go on to represent Great Britain. He has also coached many world and Olympic medallists.

The BUSA 'Coach of the Year' award was introduced this year to acknowledge and celebrate great coaches.  It is awarded to individuals that have shown dedication and commitment to bring considered improvement or success to a BUSA domestic, representative or international team.

BUSA is the recognised governing body for university sport in the UK and by the UK Sports Council and National Governing Bodies of Sport. Its members include 151 universities and Institutes of Higher Education.

Gordon said: “I am delighted to have received this prestigious award. It is also a tribute to the extremely hard work and sacrifices my athletes have made over the past few years. They rightly deserve to share this with me.”

Bob Reeves, Director of the university's Centre for Sport, Exercise & Health, said: “This award is recognition for the terrific job Gordon has done in taking our student club from being one of many, to one of the very best, as a result we are now attracting some excellent oarsmen to the University.

“It also shows how much more can be done by having a full-time coach and something we hope to repeat in other sports. As Gordon is now managing our overall high performance programme he is also benefiting students in other sports.”

Gordon will be presented with his award today, Thursday 14 June, at the annual BUSA Awards Dinner in Westminster by BUSA President, John Inverdale.