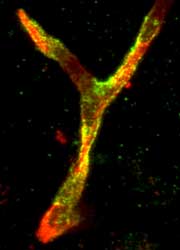 The novel idea that one cause of high blood pressure lies within the brain, and not the heart or blood vessels, has been put forward by scientists at the University of Bristol and is published this week in the journal Hypertension.

The novel idea that one cause of high blood pressure lies within the brain, and not the heart or blood vessels, has been put forward by scientists at the University of Bristol and is published this week in the journal Hypertension.

Professor Julian Paton and his colleagues Hidefumi Waki and Sergey Kasparov, have discovered a new protein, JAM-1 (junctional adhesion molecule-1), which is  located in the walls of blood vessels in the brain.

JAM-1 traps white blood cells called leukocytes which, once trapped, can cause inflammation and may obstruct blood flow, resulting in poor oxygen supply to the brain. This has led to the novel idea that high blood pressure – hypertension –  is an inflammatory vascular disease of the brain.

One in three people in the UK are likely to develop hypertension, and with 600 million people affected world wide, it is of pandemic proportions.

Professor Paton said: “We are looking at the possibility of treating those patients that fail to respond to conventional therapy for high blood pressure with drugs that reduce blood vessel inflammation and increase blood flow within the brain. The future challenge will be to understand the type of inflammation within the vessels in the brain, so that we know what drug to use, and how to target them. JAM-1 could provide us with new clues as to how to deal with this disease.”

The alarming statistic that nearly 60 per cent of patients remain hypertensive, even though they are taking drugs to alleviate the condition, emphasises the urgency of looking for new mechanisms by which the body controls blood pressure, and finding new therapeutic targets to drive fresh drug development.

As there is still poor understanding about what changes in people when hypertension develops, the finding of JAM-1 is of great interest and opens up multiple new avenues for further research and potential treatment.

Professor Jeremy Pearson, Associate Medical Director,of the British Heart Foundation, said: "This exciting study is important because it suggests there are previously unexpected causes of high blood pressure related to blood supply to the brain. It therefore opens up the possibility of new ways to treat this common, but often poorly managed, condition."

Funded primarily by the British Heart Foundation, Professor Julian Paton and colleagues have been working on the problems of hypertension for 12 years. Although the idea that the brain is to blame for high blood pressure is controversial, recent evidence from both animal models and patients supports this.