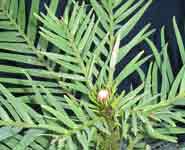 One of the world's oldest and rarest plants dating back to the time of the dinosaurs, the Wollemi Pine (Wollemia nobilis), is a new addition to the plant collection at Bristol University's Botanic Garden.

One of the world's oldest and rarest plants dating back to the time of the dinosaurs, the Wollemi Pine ( Wollemia nobilis), is a new addition to the plant collection at Bristol University's Botanic Garden.

Visitors will have the opportunity to see the Wollemi Pine together with new developments within the garden when the Botanic Garden opens with its 2007 programme this Friday, April 6.

Until 1994, the Wollemi pine was known only from fossils. From the time of the dinosaurs, the species survived undiscovered in its own island - an inaccessible canyon in Wollemi National Park, west of Sydney, Australia. David Noble, a park ranger, spotted the conifer's fern-like leaves and unusual bubbly bark. Australian botanists quickly recognised it as a new genus.

Despite having outlived ice ages and bush fires, less than 100 mature trees now exist in the wild and their location remains a closely guarded secret. In 1994 this astonishing find became the focus of extensive research to aid its conservation. A propagation programme was developed to prevent the original trees being threatened by plant collectors and in 2005 the Wollemi Pine went on sale to the public.

The Wollemi Pine arrived at the Botanic Garden in January this year. When the plant is large enough it will be planted into the Evolutionary Dell where it will find a home in the Cretaceous section.

The garden has been designed with a strong evolutionary theme with four core collections: Evolution, Rare and Threatened Natives, Mediterranean Plants and Useful Plants.

Laid out in exciting displays the garden includes an evolutionary dell, a phylogeny display, Chinese and European Herb Gardens, a rock garden, a pool surrounded by native plants, together with a large glasshouse divided into four climatic zones; Sub Tropical, Warm Temperate, Cool and the Tropical Glasshouse zone.

"The story of the Wollemi Pine discovery is that of an incredible chance find. It was long been my wish to obtain this important plant for our collections every since I first heard of its discovery in 1994."

The University of Bristol Botanic Garden at The Holmes will open to the public with its new 2007 programme on Sunday, Wednesday, Thursday and Friday, 10 am to 4.30 pm from Friday 6 April. Admission is £3. Children aged 5-16 £1 (children under 5 free.) Entrance to the Garden is free to members of the Friends of the Botanic Garden Association during opening hours.

Directions to The Holmes

Members of the public wishing to support the work of the Botanic Garden should join the Friends of the Garden. For more information go to www.bris.ac.uk/botanic-garden/support/friends/ or write to Susan Redfern, The Membership Secretary, 24 Dublin Crescent, Henleaze, Bristol BS9 4NA.