Females do best if they wait a while 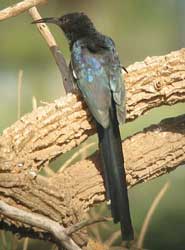 Starting to breed late in life is a bad idea if you want to maximise the number of offspring that you produce – or so the theory goes.

Starting to breed late in life is a bad idea if you want to maximise the number of offspring that you produce – or so the theory goes.

But doubt has now been cast on this hypothesis – one of the biggest assumptions in behavioural ecology – by researchers from the universities of Bristol and Cape Town and published today in Current Biology.

Green woodhoopoes are a cooperative bird species that live in year-round, residential groups of 2–12 individuals in which only one pair breeds per season. The remaining individuals help to raise the offspring of the dominant pair, while waiting to breed themselves. Consequently, although both males and females reach reproductive maturity at one year of age, individuals may not start breeding for several years.

Using data gathered over 24 years, Dr Andy Radford and colleagues demonstrate that the females that started breeding later in life actually had more offspring than those that started earlier. Males, on the other hand, met the traditional expectation that a delayed start to breeding results in fewer offspring.

The researchers hypothesise that this surprising and apparently paradoxical situation is because females that attempt to start breeding early in life have a very high mortality rate. In contrast, females who start breeding later tend to live longer, have longer breeding careers, and thus produce more fledglings.

Dr Radford, from Bristol University’s School of Biological Sciences, who is funded by the BBSRC, said: “It has been generally assumed that males and females suffer similarly from a delayed start to breeding, and many studies have investigated how non-breeding birds might mitigate this assumed cost. However, as in many facets of life, the sexes differ dramatically: although male woodhoopoes do indeed suffer if they don’t start breeding as soon as possible, females do best to wait a while.”

The authors postulate that the reason why young females have such a high mortality rate when attempting to breed is that they are not in as good condition as older females. Because breeding female woodhoopoes lay all the eggs and conduct all the incubation, they pay a potentially high cost.

This is exacerbated because in incubating the eggs overnight, the breeding female sleeps alone, while the rest of the group roost communally; she therefore suffers a potential thermoregulatory cost in addition to the costs associated with laying and incubation. If young females are in poorer condition than older females, they will be more likely to die as a consequence of these costs.

Amanda Hawn was supported by a fellowship from the Princeton-in-Africa programme, Andy Radford is a  BBSRC (Biotechnology and Biological Sciences Research Council) David Phillips Fellow, and Morne du Plessis was funded by the National Research Foundation of South Africa.