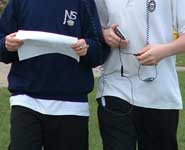 Pupils from Nailsea School will be demonstrating what designs and facilities they would like to see in their new school using a mediascape on March 29.

Pupils from Nailsea School will be demonstrating what designs and facilities they would like to see in their new school using a mediascape on March 29.  A mediascape is composed of sounds and images placed digitally outside in the landscape, which people can access using a handheld computer (PDA) and a pair of headphones.

The project, “Accessing located media through new forms of personal device: a public dialogue”, led by Dr Kirsten Cater and Dr Mike Fraser from Bristol University’s Department of Computer Science began in October 2006 and is funded by an EPSRC Partnerships for Public Engagement Grant.

Nailsea School was selected in September 2006 to be one of the schools in the Building Schools for the Future (BSF) project funded by the Department of Education and Skills (DfES).  It will provide Nailsea with a new state-of-the-art school within three years, costing approximately £28.8 million and will be the single largest building project undertaken by the authority.

Over 12 sessions 15 pupils were introduced to the technology, the software they would be using and they discussed the different stakeholders involved in the new school (e.g. builders, visitors, pupils) and what designs and facilities they would like to see in the new school.

The pupils then created their own mediascape using the Mobile Bristol authoring tool, to get across their opinions and designs for a particular stakeholder from those identified.  The goal was to see how the pupils would use the software and think about the content and context of the information they were choosing and delivering via the mediascape platform.

In the final few sessions the pupils were introduced to a robot called the “Limbot”.  The robot uses an arm as the primary means of communication between the robot and the user.  The pupils used the robot to point at parts of their mediascape by recording a sequence, e.g. movement, and then playing it for others to experience.

Dr Kirsten Cater said: “We chose to work with Nailsea School as they have specialist status in Media and Technology which was appropriate for the project.   It is important to the school to engage the community at large in what the design of a new school should offer, including its own pupils.

“As part of this project we have been helping the pupils articulate their thoughts and opinions on what the new school should be like by enabling them to demonstrate different designs using located mediascapes.”

Dr Mike Fraser added: “The pupils liked the idea of a physical device to guide groups of stakeholders around the real space on which their mediascape was placed (the playground where the new school buildings were to be built) making the experience more social than using just PDAs.  They also enjoyed exploring the difference of recording pointing gestures in-situ, instead of designing them on-screen and then experiencing them on the PDA.”