Males caring for offspring is a good reproductive strategy 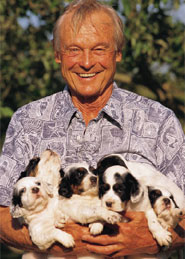 Caring fathers in the animal world aren’t necessarily at a disadvantage compared with those who abandon their offspring, according to new research from the University of Bristol, published today in the Royal Society journal Biology Letters.

In many species, males may increase their reproductive success in either of two ways: by caring for their offspring, which enhances offspring survival, or by deserting and searching for additional mating opportunities. Which of these alternatives will evolve under a given set of circumstances can be analysed with mathematical models, according to new research from the University of Bristol, published today in the Royal Society journal Biology Letters.

Their model takes into account a number of factors surrounding caring and deserting males. For example, both male types may be equally susceptible to paternity loss or caring males may have a superior ability to defend their paternity, and a caring male may reduce its amount of care in response to being cuckolded, thus decreasing the survival chances of offspring fathered by deserters.

Dr Fromhage said: “Earlier work has suggested that any gain accrued to deserters through re-mating inflicts an exactly corresponding decrement on carers, and thus has a double impact on the relative reproductive success of the two male types.  However, this double impact only arises if the male types occur with equal frequency and deserting males are maximally biased towards cuckolding caring males rather than other deserting males.

“Such an assumption is hard to justify biologically, especially since caring males may often be in a better position to defend their paternity.  If the latter is true, then male care actually provides a twofold advantage and can be maintained despite high probabilities that deserting males achieve an extra-pair copulation.

“Our model thus rejects the view that a fitness gain achieved through male care is generally worth less than an alternative fitness gain through re-mating.  This point is critical to the interpretation of past and future studies of parental care, sexual selection and the evolution of mating systems.”

The paper: Stability and value of male care for offspring: is it worth only half the trouble? Lutz Fromhage, John M. McNamara and Alasdair I. Houston Royal Society journal Biology Letters doi: 10.1098/ rsbl.2006.0616