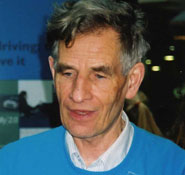 Howell Peregrine joined the Mathematics Department in 1964 following his undergraduate and postgraduate training at Oxford and Cambridge. He joined a small but strong applied mathematics group which excelled almost exclusively in fluid dynamics following some inspired appointments by the Head of Department, Professor Leslie Howarth, one of the pioneers in boundary-layer theory in the 1940s and ’50s which played such a key role in the development of aeronautics. Up until his untimely death, Howell continued to play a key role in maintaining and promoting the study of fluids and ensuring that Bristol remained one of the few centres of excellence in the discipline.

Fluid dynamics is a vast and difficult subject and many aspects, such as the onset of turbulence, for example, are still not fully understood. Howell’s knowledge of the subject was encyclopaedic but his main interest and fascination was in all aspects of water waves, a phenomenon familiar to us all. In particular, he concerned himself with how they were formed, how they built up to breaking, and their impact on coastal structures, all important questions for offshore and coastal engineers. His contributions in these areas are universally recognised and were reflected in the numerous invited talks he gave and conferences he attended as well as the constant stream of visiting scientists he attracted to the department. Younger generations are still referred to his important 1966 paper on shallow-water theory, while his recent results on the extremely high wave impact forces which can be experienced by harbour walls are still ‘making waves’ in the coastal engineering community.

He had a natural physical insight linked to a well-developed skill in mathematical modelling. He was never more at home than when he was out observing real waves, or supervising experimental confirmations of his predictions in the laboratory. His research seminars were always carefully prepared and interspersed with numerous pictures of waves to illustrate the talk, frequently taken while on holiday at the seaside with his family.

The sheer volume of his research activity was prodigious. Aside from his over 100 refereed research papers and numerous conference papers he successfully supervised eight MSc and 26 PhD students and appointed 29 research assistants to work with him on research projects. Many of these now enjoy senior academic or industrial positions both in the UK and the EU. He bid successfully for research grants worth in excess of £1.3 million from the UK research councils and 400,000 ECUs from Europe. He was an invited speaker at conferences or courses at over 40 overseas locations and accepted extended overseas visits to 10 institutions. Despite all this productivity, he also found time, as Associate Editor of the Journal of Fluid Mechanics, arguably the most prestigious journal on the subject, to process over 50 research papers a year since 1981, in each case seeking reports from three referees.

Howell’s industry was not solely confined to research. He was equally diligent in his contributions within the Department and the Faculty of Science. He was an enthusiastic lecturer, always keen to offer new courses at both undergraduate and postgraduate level, and he was an active contributor to discussions on, and papers about, proposed teaching changes and all matters academic. Early in his career he completely rewrote the first-year Science Faculty timetable, which has since become a model for other faculties to follow.

There is little doubt that Howell lived for his work. He reached normal retirement age in 2004 with little apparent change in his work–life balance. A highly successful event was held in July 2005 in Bristol, which attracted colleagues from around the world to a series of lectures in recognition of his contributions. At his insistence, the word ‘retirement’ did not appear in the publicity!

The main reason for his prodigious capacity for hard work was his remarkable fitness. He rowed at Oxford and was an active member of the Bristol Ariel Rowing Club until the arrival of his young family diverted his energies to the demands of child-rearing. He cycled to work every day regardless of the weather, donning a garish yellow flowing cape and hat in the severest conditions. I lived close by and despite passing him by car as he toiled up the hill out of Westbury, he usually overtook me in the final downhill run to the department as I queued in the inevitable line of rush-hour traffic.

Howell squeezed everything he could out of life. An overseas conference was not just an opportunity to make new friends and collaborations, but also to explore new surroundings. A past president of the Bristol Naturalists’ Society, he would equip himself with detailed maps of the locality and use every minute of free time to set off and explore local beauty spots and study the natural flora and fauna.

On one occasion the delegates had just arrived for a water wave workshop at an idyllic location just along the coast from Marseille and, from a safe distance, we were all enjoying the waves crashing on to the rocks, when to everyone’s astonishment who should appear but Howell, clad in a fetching pair of bathing trunks and promptly plunging into the sea in front of us.

On another occasion, a group of us arrived early in the morning in Paris having some hours to kill before taking a train at 3 pm to a workshop location. Howell immediately set off at a cracking pace with his RA, determined to visit the sights while the rest of us strolled round a local park before gravitating towards a bar and restaurant for an extended lunch. It was just before the train left when he reappeared, his RA struggling to keep up, having taken in the Eiffel Tower and much more en route.

Howell made friends wherever he travelled around the world. I cannot count the number of times, when I mentioned I was from Bristol, that the response was, ‘Ah, then you must know Professor Peregrine’. I confess it gave me great pleasure to admit that not only did I know him, but that he was also a close friend whose office was across the corridor from mine. Howell’s death is a great loss to fluid dynamics but the greater loss is of a unique individual who was held in great affection by his friends and colleagues worldwide.