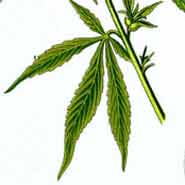 If cannabis causes schizophrenia - and that remains in question - then by 2010 up to 25 per cent of new cases of schizophrenia in the UK may be due to cannabis, according to a new study by Dr Matthew Hickman and colleagues, published in Addiction journal.

Substantial increases in both prevalence and incidence of the disease are forecast by the end of the decade, with increases in schizophrenia starting earlier among young men in particular.

The research study matches historic trends in cannabis use and exposure from a national population survey against estimates of new occurrences of schizophrenia in three English cities (Nottingham, Bristol and the London Borough of Southwark). The researchers assess what might happen to schizophrenia cases if we assume a causal link between cannabis use and onset of psychotic symptoms, an association widely recognised by some psychiatrists and researchers and considered recently by the Advisory Council on the Misuse of Drugs.

Exposure to cannabis grew fourfold over the thirty years to 2002, and its use among under-18s by 18-fold, say the researchers. If cannabis use causes schizophrenia, these increases in its use would lead to increases in overall schizophrenia incidence and prevalence of 29 per cent and 12 per cent respectively, between 1990 and 2010. (Incidence is defined as the frequency of new occurrences; and prevalence is the percentage of the population affected by the disease.)

John Macleod, co-author and academic GP, said: “We need to remember that our study does not address the question whether cannabis causes schizophrenia: this remains unclear.”

Matthew Hickman, lead author of the study, added: “The challenge now is to improve our data on schizophrenia occurrence to see whether the projected increase occurs. This will tell us more about how important cannabis is as a cause of schizophrenia.”

Matthew Hickman, Peter Vickerman, John Macleod, James Kirkbride, Peter B. Jones. Cannabis and schizophrenia: model projections of the impact of the rise in cannabis use on historical and future trends in schizophrenia in England and Wales (2007). Addiction 102 (4), 597-606.

Addiction is a monthly scientific journal, read in over sixty countries and publishing more than 2000 pages every year. Owned by the Society for the Study of Addiction, it has been in continuous publication since 1884. Addiction publishes peer-reviewed research reports on alcohol, illicit drugs and tobacco, bringing together research conducted within many different disciplines, as well as editorials and other debate pieces.