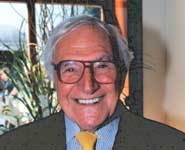 Neville Butler, Emeritus Professor in the Division of Child Health, died recently. Dr Diana Pomeroy reviews the life, career and legacy of a man who was 'tireless and dedicated in pursuing his passion for understanding human lives'.

Neville Butler achieved something quite unique to improve the lives of children and families throughout the UK and beyond. Through his tireless efforts he produced priceless information about the health, development, social well-being, education and lifestyles of thousands of British families.

In this context he initiated, and was the prime mover in establishing and continuing, two of Britain's world renowned research resources, namely the National Child Development Study (1958) and the British Cohort Study (1970). Where others may have concentrated efforts on only one aspect of child development, he pioneered a visionary multidisciplinary approach to the study of human development. Testimony to this is available in over 130 books and publications used by researchers all over the world.

The ultimate objective of these observational and interventional studies is to diminish or prevent in future generations adverse factors in health, behaviour, education and family life. A range of important medical, social and developmental indices arising from the data are proving of immense value both to practitioners and to policy makers in the fields of medicine, education and social science. Neville Butler has liaised with policy makers in both Houses of Parliament and has presented evidence based on his work to various Select Committees in the House of Commons, including the Social Services Committee. In addition the work has been a major source of evidence for three Royal Commissions (Plowden 1967, Court 1976 and Warnock 1978).

Remarkably, he has embraced all this important national and international work entirely voluntarily and in parallel with full-time clinical duties within the NHS. He was Physician to the Royal Hospital for Sick Children, Great Ormond Street and then Professor of Child Health at the University of Bristol. For this alone he was awarded the highest NHS Merit Award (A+) for his clinical achievements.

Another exceptional achievement was in establishing and continuing to accrue knowledge of perinatal medicine and bringing together under one umbrella obstetric and newborn care. His original national Perinatal Mortality Survey, carried out for the National Birthday Trust Fund, was the first and most comprehensive in the world and still serves as a model. The results, which have been used widely by obstetricians, paediatricians, midwives, general practitioners and others in the field, stressed the need for careful selection of high-risk mothers, better care in labour, and more post-mortems on babies dying around the birth period. It was also one of the forerunners of the widely used cliniopathological perinatal conferences. Neville Butler's definitive work on antenatal care, smoking in pregnancy, foetal growth, postmaturity and optimum place of delivery have done much to change the way birth is managed in Britain and form a basis of the present perinatal care. For these achievements he was made a Fellow of the Royal College of Obstetricians. Indeed, he has been honoured by his medical colleagues on a number of occasions, including the Harding Award for Services to Handicapped Children and a special invitation to present the Cuthbert Lockyer Lecture at the Royal College of Physicians.

It is the ongoing longitudinal aspects of these two unique continuing studies that gained Neville Butler a national and international reputation. Many studies have produced valuable cross-sectional information, but this cannot compare with the complete picture of a generation which ensues from longitudinal work. It is remarkable that in an entirely honorary capacity he has devoted nearly 50 years of his life to planning and progressing these studies.

Without such dedication it is difficult to see how these studies could have survived. Through his charismatic leadership and foresightedness he managed to enthuse and inspire his colleagues and facilitated those from various disciplines to work together harmoniously. It is indeed a prodigious feat in itself to bring together teachers, medical officers, health visitors and nurses to carry out voluntarily the national fieldwork throughout the first two decades of the lives of both cohorts.

In order to ensure the continuity of this work he founded in 1983, and continued to direct, the International Centre for Child Studies (ICCS), a registered charity, until his death. A major emphasis of the ICCS is to support multidisciplinary longitudinal studies in the UK and worldwide.This led in 1997 to the establishment of a sister organisation in the US, the International Center for Child and Family Studies, of which he was president.

This sister organisation in the US has been carrying out research parallel to that being done on the British National Cohort Studies and has opened up new fields of collaborative study between the two countries.

Through Neville Butler's previous work and via the charity he has played a major role in raising over £1 million in research funds from industry, commerce, charitable trusts, foundations, Government departments and Research Councils.

Internationally, Neville Butler realised that the British findings could form a blueprint and source of knowledge for both developed and developing countries overseas. In fact the national work has achieved such acclaim that links have been developed with over 40 countries. Either by invitation, or as Technical Adviser/Consultant to the Maternal and Child Health and ICD Sections of the World Health Organisation,  Neville Butler advised on how to adapt the UK work on population studies to many other countries. He also initiated, for the Pan American Health Organisation, an ongoing national longitudinal study in Cuba, which also formed a model that other countries are following.

The complete data gathered so far in these two British Cohort Studies is now housed in a computerised databank at Essex University where it is available for bona-fide research workers all over the world. Considerable use has been made of this for secondary analysis in the US.

Recognition of the value of the studies is shown by the fact that the Economic and Social Research Council is underwriting support for the foreseeable future. This national resource is now housed in the Centre for Longitudinal Studies (CLS) at the Institute of Education, London University. CLS was established in 1998 following the move from the Social Statistics Research Unit at City University and before that the National Children’s Bureau. Neville Butler played a significant role in the development of the new Centre in his role as Visiting Professor.

The research resources now include the new ‘Millennium Cohort Study’ comprising follow-up of over 19,000 babies with added representation for Scotland, Wales and Northern Ireland with which Neville worked closely from inception. The aim is to undertake vital intergenerational, intragenerational and intercohort studies on the cohort members and their offspring. The Centre has provided information for the Government on social exclusion, problems of literacy and numeracy, and medical conditions such as diabetes and asthma. Neville Butler was also a Trustee of a new venture, Longview, established with colleagues in the Institute of Education, University College and the National Centre for Social Research, along with other experts in longitudinal research.Longview is dedicated to the development of longitudinal study and to ensuring that its findings are at the heart of the policy process.

Neville Butler was tireless and dedicated in pursuing his passion for understanding  human lives and finding solutions to the problems of growing up in changing times. His vision of using longitudinal studies to build the knowledge needed was ahead of its time. Through the advances in modern information and communications technology, this vision is now being realised on an ever-widening scale in Britain and across the world. Neville’s foresight and commitment was inspirational and rewarding, personally and scientifically, to everyone who had the privilege of knowing him. His contribution to the science of human development forms a legacy of huge benefit to all of us.

The funeral will take place on at St Paul's Church, Clifton on Tuesday 13 March at 11.30 am. The service will be followed by a reception in the Reception Room of the Wills Memorial Building. All are welcome to attend.