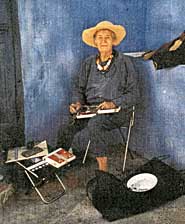 Mersa Gibbons, a former secretary and receptionist at Manor Hall, died in December at the age of 89. Dr Martin Crossley Evans offers this account of her full and colourful life.

Mrs Gibbons served as a formidable Warden’s secretary and receptionist in Manor Hall between 1979 and 1985. She was a woman of trenchant views, freely expressed, and had a redoubtable, inextinguishable spirit. She was particularly terrifying to a newly appointed and callow Warden of 26 years who had the temerity to interrupt her while knitting scarves for her young grandsons, Tom and Alex, by asking for help with a set of minutes. She will be remembered for her fire and her passion, for her love of beauty, her thirst for knowledge and respect for education, and her deep compassion for the sufferings of others.

Her rich and varied life gives clear and poignant insights into a vanished world. She was born in January 1917 into a landed family, which divided its time between a country house in Holworth, Dorset and London. She was called Mersa after Mersa Matruth, the town where her father, Edward Foster, was stationed in the Great War. He believed that his daughters should be fine horsewomen and prepared for presentation at court and marriage. Two of her aunts were noted Edwardian beauties and débutantes, Florence, Baroness van Heemstra (who was one of the last group of ladies to be presented to Queen Victoria, and went on to celebrate her 100th birthday), and Evelyn, Marchioness of Downshire. Mersa inherited her family’s striking looks. Like her three sisters, she had a succession of governesses and was finished in Paris, where she was taught French and deportment by a Russian countess who had escaped from St Petersburg at the outbreak of the Bolshevik revolution. Through her life in London she met Thomas Hardy and his socially ambitious second wife, who called upon her family in the hope of widening her circle of acquaintance in the metropolis, and in Dorset she knew T E Lawrence, and must have been one of the last people to have met both men.

While her older sister Pam went on to enjoy an acclaimed career as a dancer (and merited an appreciative visit in her dressing room from Hermann Goëring following a performance before Hitler in the Tiegarten in Berlin in 1938), Mersa became a secretary to one of her relations, Lt Colonel Sir Arthur Pelham Heneage (1881-1971). During a long career as a Member of Parliament, he brought only one bill, against the docking and nicking of horses’ tails, to the floor of the House. Her experience of working for this ‘dear, sweet, silly man’ converted her initially to communism. Although she greatly admired Winston Churchill, she remained a passionate socialist and pacifist for the remainder of her life, canvassing in Bristol for Mr Wedgwood Benn, and attending rallies at Greenham Common and numerous vigils and peace marches. She strongly opposed the war in Iraq, which finally alienated her from the Labour Party.

Following her marriage to John Gibbons, the heir to a baronetcy created in 1752, she had three children, Charlotte (Mrs Hylton Baynton-Coward), (Dr) Jane (Mrs Neville Grant), and William, the present holder of the baronetcy.  Her husband’s capture and internment by the Germans as a prisoner of war, and little money, meant that the family were constantly on the move. Mersa finally settled in Clifton in the late 1950s where she trained as an actor at the Old Vic Theatre School. She subsequently taught French in Bristol and Somerset secondary schools, and pioneered language teaching in primary schools, until retirement in 1977.

In her forties, Mersa took up painting and travelled widely – France, Spain, Crete, Madeira, Tangiers, Morocco, India and Latin America – taking a sketch book with her wherever she went. She enthusiastically described to her friends her feelings and the sense of love that she felt whilst painting in watercolour or using charcoal and pastels. She held major exhibitions of her work in Bristol in 1994 and 1998, and another entitled Figures in the Landscape: Images of Rajestan in the Contemporary Art Gallery in Ebury Street in 1999. One of the paintings from her first exhibition hangs in Manor Hall. She contributed to numerous other exhibitions, and in December 2007 will have a retrospective with Emeritus Professor Egginton and Tim Hobson at the Royal West of England Academy.

After her second retirement in 1985 she went to work in the Academy’s shop and became part of a circle of painters and sculptors centred on the Academy. She was an active member of the Clifton Arts Club and dedicated much time to the Open University, gaining her BA in 1983, and her BA with honours in 1986. She loved poetry, modern art and nature, and was awarded a prize by the Clifton Gardens’ Association for the ‘best garden in Clifton’. She could be seen regularly in the Union pool to within 18 months of her death, was a ruthless Scrabble player, a good cook and an excellent hostess. Had she lived in the 18th century she would have undoubtedly founded a literary and artistic salon of the kind that flourished in Paris before the Revolution, over which she would have presided with great flair and originality.

She met old age and death with dignity. An atheist, with little time for organised religion, she retained her ideals and was able to make a long-hoped for visit to Petra shortly before her death in the company of her son, William.

A demanding, critical friend, tough and yet deeply compassionate, warm and sensitive, all of us who attended her 80th birthday will remember her moving tribute to the part that friendship had played in her life. She made many lives richer, and all of us who gained her friendship and respect are the poorer for her passing, but are left with a wealth of memories rich in love, encouragement and laughter.

She leaves behind a dynasty of Bristol graduates, which includes her daughter, Jane (BA Arts 1963), her son, William (BSc Economics and Social History 1971), her daughter-in-law Patricia (née Howse), CBE (LLB 1971), her son-in-law, Neville Grant (BA Philosophy and English 1963), a Convocation representative on Court, and one of her nine grandchildren, Thomas Grant (BA English 1991).

An appreciation of Mersa by her daughter Dr Jane Grant appeared in the The Guardian on 22 January 2007.