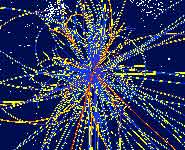 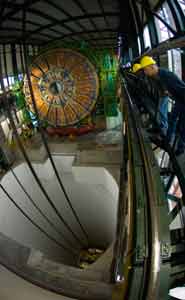 Nick Grant, a student at Bristol watches the lowering of part of the CMS Copyright CERN 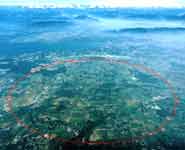 The location of CERN on the ground Copyright CERN

Scientists at the University of Bristol will be holding their breath as a piece of equipment weighing as much as five Jumbo jets (1,920 tonnes) is slowly lowered into place.

Scientists at the University of Bristol will be holding their breath this morning (28th February) as a piece of equipment weighing as much as five Jumbo jets (1,920 tonnes) is slowly lowered into place. You can watch it on the webcam link.

Dr Helen Heath, one of the scientists involved from the University of Bristol, said, “This is a very exciting time as the experiment many of us have worked on for over 10 years begins to come together."

The equipment, known as the CMS detector, is an essential part of the world’s largest scientific experiment which hopes to recreate conditions in the Universe as they were less than a second after the Big Bang. The experiment is taking place 100 metres underground at CERN, near Geneva. CERN is where the World Wide Web was invented.

The CMS detector is part of the Large Hadron Collider (LHC), CERN’s newest facility, which is now in the final stages of construction and due to start operations in November 2007.

The LHC is set inside a 27 km circular tunnel underground – about the same size tunnel as the Circle Line. It lies under the border between France and Switzerland. Once it is completed two beams of protons will be accelerated in opposite directions around the tunnel, close to the speed of light. Where the particles collide, new ones will be formed, spraying out in all directions around the collision point.

The CMS detector will ‘detect’ what kind of particles are created in the collision, helping us to gain new insights into the beginnings of the Universe. “This is a very exciting time for physics,” said CMS spokesman Jim Virdee from Imperial College London, “the LHC is poised to take us to a new level of understanding of our Universe.”

One of the particles being sought is called the Higgs boson particle which, if it is found, will explain many of the mysteries of the Universe, such as why we can only see 5 per cent of all the matter known to exist. The particle is name after Professor Peter Higgs who went to Cotham Grammar School.

Up to 30 scientists, including students, at the University of Bristol are working on the Large Hadron Collider, and 20 of those are working directly on the CMS detector.

Dr Helen Heath works on a part of the detector which measures the energies of electrons and photons (particles of light), while her husband, Professor Greg Heath, works on a system that decides which single event is stored. Professor Heath said: “For every half-million collisions, only one can be recorded as there simply aren't enough computers in the world to store them all.”

At 5:00 am GMT tomorrow morning (28th February 2007) the heaviest piece of the CMS  (Compact Muon Solenoid) particle detector will begin a momentous journey into its experimental cavern.

“This is a challenging feat of engineering, as there are just 20 cm of leeway between the detector and the walls of the shaft,” said Austin Ball, Technical Coordinator of CMS. The entire process is expected to take about ten hours to complete.

Using a huge gantry crane, the pre-assembled central piece of the detector will be lowered into position. It will be supported by four massive cables, each with 55 strands and attached to a step-by-step hydraulic jacking system, with sophisticated monitoring and control to ensure the object does not sway or tilt.

The first seven of 15 pieces of the CMS detector have already been lowered, with the first piece arriving in the experimental cavern on 30 November 2006. The giant element being lowered tomorrow, which is 16 m tall, 17 m wide and 13 m long, marks the halfway point in the lowering process with the last piece scheduled to make its descent in summer 2007.

Professor Keith Mason, CEO of the Particle Physics and Astronomy Council (PPARC), which pays the UK subscription to CERN, said “The lowering of the largest piece of CMS today marks a major engineering milestone towards the switch-on of the Large Hadron Collider (LHC) later this year. It is something of a paradox that the largest, heaviest detectors ever built will be used to study the smallest scientific events.”

This research at the University of Bristol is funded by the Particle Physics and Astronomy Research Council (PPARC), the UK’s strategic science investment agency. It funds research, education and public understanding in four areas of science - particle physics, astronomy, cosmology and space science.
Please contact Cherry Lewis for further information.