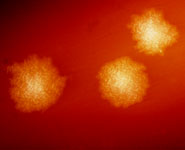 Academics have found, for the first time, smells from healthy faeces and people with infectious diarrhoea differ significantly in their chemical composition and could be used to diagnose quickly diseases such as Clostridium difficile (C. Diff.).

Academics have found, for the first time, smells from healthy faeces and people with infectious diarrhoea differ significantly in their chemical composition and could be used to diagnose quickly diseases such as Clostridium difficile(C. Diff.).

It is hoped the discovery of these chemical profiles will lead to the development of a device capable of rapid diagnosis at the bedside, saving both time and money.

The study, published online in The FASEB Journal, is the result of a joint collaboration between Dr Chris Probert, Consultant and Reader in Gastroenterology at Bristol University and Professor Norman Ratcliffe at the University of the West of England.

For a long time it has been known that stools have distinctive and different odours if there is an infection.  What the researchers have done is to take this 'knowledge' a step further by analysing the odour of healthy donors and patients with gastrointestional disease to see if precise chemical profiles can be established.

The researchers compared faeces of healthy donors together with patients with ulcerative colitis, Campylobacter jejuni and Clostridium difficile (C. Diff.) and found their chemical composition were each significantly different.

The next stage of the academics research is to develop a prototype rapid diagnosis device able to be operated by healthcare staff at all levels.

Dr Chris Probert said: "The discovery of chemical profiles is a major step forward in the diagnosis and treatment of people with gastrointestinal disease.  Early treatment of Clostridium difficile means patients have a much better chance of survival and fewer complications.  However, at present the average length of time taken to diagnose the condition is eight days. "

Two of the most common types of infectious diarrhoea are Campylobacter jejuni and Clostridium difficile (C. Diff.).  Although less well known than the MRSA superbug, C. Diff. is just as serious, and affects more than 50,000 people each year in England and Wales at a cost to the NHS of around £60 million.

Dr Chris Probert added: "There is a huge potential for a rapid diagnosis device in the UK, 30,000 samples are tested in Bristol alone each year.   However, the device could be adapted for use in developing countries where 7,000 children die as a result of diarrhoea every day. Our next aim is to produce a prototype device capable of diagnosing at any healthcare setting."

Professor Norman Ratcliffe, from the University of the West of England, added: "There are numerous different kinds of infection that cause diarrhoea and a speedy diagnosis would lead to more appropriate use of antibiotics.  A rapid diagnosis device has the potential to save lives and reduce the cost burden to the NHS.  Early isolation of infectious patients would reduce hospital outbreaks leading to fewer ward/hospital closures."

"Rapid diagnosis of intestinal illnesses is as useful a contribution to public health as one could imagine," said Gerald Weissman, M.D., editor-in-chief of the FASEB Journal.  "The method developed by Garner et al is not only useful, but also imaginative."

Last year the team were awarded £353,000 by the Wellcome Trust under their University Translation Award scheme and this study is funded by the grant, which is part of a three-year project.

The Wellcome Trust is the most diverse biomedical research charity in the world, spending about £450 million every year both in the UK and internationally to support and promote research that will improve the health of humans and animals. The three year University Translation Award has been awarded jointly to the University of the West of England and the University of Bristol. For more information on the Wellcome Trust, visit www.wellcome.ac.uk