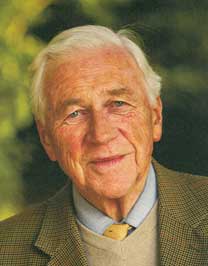 David Tudway Quilter, the University's fifth Treasurer, died in January. Professor Peter Haggett offers this appreciation of a man who was 'a banker by profession, a gardener by passion, and a public servant by sense of duty'.

David Tudway Quilter, whose family have 400-year-old links with the Wells part of Somerset, was a banker by profession, a gardener by passion, and a public servant by sense of duty. From Eton he was bound for Cambridge but with the onset of war went straight into service with the Coldstream Guards and saw heavy fighting in Italy. His book, No Dishonourable Name, records the history of the regiment. On demobilisation with the rank of captain, he joined Barclays Bank and rose through the ranks to be a local director of their flagship Pall Mall branch.

Inheriting from his uncle the Tudway estate near Wells in 1962, his banking career continued but in the West Country. The gracious family home at Milton Lodge provided the opportunity to restore and enhance the terraced gardens and arboretum into one of the great gardens of the West of England. Other gardens he designed included the Mary Mitchell Memorial Garden, the Bishop's Palace Garden, and the Society of Merchant Venturer’s garden in Clifton. He was Master of the Merchant Venturers in 1984.

Heavy public duties ranged from county level (as High Sheriff and Vice Lord Lieutenant of Somerset), through city (as mayor of Wells), to local university and local school (the first lay governor of Wells Cathedral School in 800 years). At the national level he gave very long service to both the Outward Bound Trust and the Carnegie Trust. But it was as chairman of the Cathedral Preservation Trust that he will be best remembered, leading the successful international financial campaign (notably in the United States) to rescue the crumbling 13th-century figures of the great medieval masons that adorn the West Front. The preservation of this Chartres-like jewel was a cause to which he gave unstinting time and energy. In this, as in all aspects of his public and private life, he had the devoted support of Elizabeth Carew Pole whom he married in 1953. They shared a love not only of gardens but of music (Roger Quilter was a favourite uncle of David’s), both leading school musical trips around the world.

David was part of a remarkable group of laymen – including Richard Hill, David Borland and Lloyd Robinson – who served the University with great distinction through the ’70s and ’80s and saw the transition from the Merrison to the Kingman years. David brought to University finance the same qualities as he did to his garden building: deep knowledge, infinite patience and an emphasis on taking a long-term view. His shrewd interventions in Senate House meetings, his kindly presence, and his quiet but infectious sense of humour will be long remembered by his many old friends in the University. He was proud that some of his grandchildren were now studying at a University of which he rightly felt such a part.