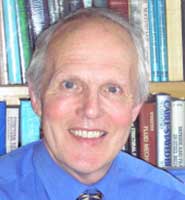 Dr Bill Smith, recently retired Senior Lecturer in Civil Engineering, died on 18 January at the age of 65. His former colleague, Professor David Blockley, contributes this account of his life.

Bill told me a tale of a raw graduate engineer who, on his first job on the building of one of the early Magnox nuclear power stations, was persuaded by a rather more adventurous colleague to climb to the very top of the unclad steelwork frame (Health and Safety being rather different in those days) to take some photos. He was very nervous of the height but plucked up the courage and climbed up, took the photos and was mightily relieved when he got back down. Unfortunately he then realised he had forgotten to take the lens cap off! Of course the story was about Bill himself. This was a sign of the man – always cheerful, always willing to have a joke.

But life was not kind to Bill over the last few years. His wonderful wife Sheila, to whom he was devoted, died prematurely. Then, having found new happiness with Sue, he was diagnosed with cancer. He died on January 18 2007 aged 65, leaving his three children Matthew, Rebecca and Julia and his new family with Sue to whom he was also devoted. Sue and Bill had recently taken up dancing and Bill seemed to like it almost more than his first sporting love – rugby.

Bill was Chairman of the Institution of Structural Engineers, Western Counties Branch 1995-6 and Treasurer for seven years. He contributed to the Institution as an adviser for mature candidates and as a complaints adviser. He served on the Institution's Education and Training Panel and the SARTOR Matching Sections panel. He was also a trustee of the Clifton Suspension Bridge.

Bill was born in April 1941 in Delhi, India – his father was a policeman. Bill took a first class Honours degree from Edinburgh University in 1964. After a spell working for Sir Robert McAlpine at Oldbury Power Station he became the last postgraduate student supervised by Sir Alfred Pugsley and obtained his PhD at the University of Bristol in 1970.

I joined the Department at the same time as Bill, and we both started lecturing in October 1969. Bill’s dedicated teaching benefited generations of students. He had a very profound understanding of structural behaviour – indeed I never came across any situation where he was wrong. So I always got him to check my examination questions! Over the years he carried out many consulting jobs including the testing and evaluation of alternative surfacing systems for the Humber Bridge, the First Severn Crossing and the Erskine Bridge. His early interest was in structural dynamics and he wrote a book on the subject in 1988 which was very well received. He worked on the fatigue of bridge decks with Stuart Cullimore and collaborated with TRRL (Transport and Road Research Laboratory) on the development of high-durability bridge deck paving. More recently he has made several contributions to the robustness analysis and safety of structures.

But his first love was teaching. He had hoped to continue part-time after retiring last August, but that was not to be. Students and colleagues everywhere will miss Bill. He was a thoroughly ‘nice bloke’ with a deep religious faith which sustained him in recent years. We will miss him.