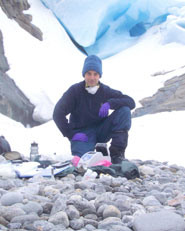 Dr Dave Cullen collecting samples from a glacier, to better understand how to detect life on Mars.

Dr Jemma Wadham in the LOWTEX facility. Walk-in freezers are a central component of LOWTEX and will be used for large scale sample storage and novel experiments on ice.

The search for life on other planets, and research into climate change, will be the focus for top space scientists and glaciologists when they gather at the University of Bristol on 9 February 2007.

The search for life on other planets, and research into climate change, will be the focus for top space scientists and glaciologists when they gather at the University of Bristol on 9 February 2007.

The event will be the opening of LOWTEX, the only facility of its kind in the UK. LOWTEX is the University’s new LOW Temperature EXperimental laboratory.

One of the projects already underway in LOWTEX includes the development and testing of miniaturized sensors to detect life in icy environments on Earth and Mars. Another project looks at whether the melting of glaciers might be accompanied by the release of methane trapped at the glacier bed, thereby causing further warming.

Dr Jemma Wadham, Director of LOWTEX which is based in Geographical Sciences, said: “One of the key ways to better understand the effect of climate on the polar regions is to re-create these icy environments closer to home.”

LOWTEX has received two million pounds of investment from the University of Bristol and UK Research Councils.

The launch will take place in Mongolian yurts under two feet of snow with frozen vodka shots to break the ice. Chill-out tunes will be provided by the Poles Apart string ensemble.

Dr Dave Cullen  from Cranfield University who will use the lab’s facilities commented: “This is a fantastic new UK facility that will allow us to simulate low temperature environments that we might encounter on space missions to Mars or Europa.”

Amongst the 100 visiting scientists and other dignitaries will be the ‘fathers’ of UK Glaciology, Professor John Nye and Dr John Glen.