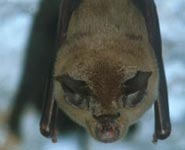 A greater horseshoe bat, which has flown around 100 miles, has amazed experts by both the extraordinary length and speed of its journey and the reasons for it.

A greater horseshoe bat, which has flown around 100 miles, has amazed experts by both the extraordinary length and speed of its journey and the reasons for it. Within three months of her birth, the baby female had set off from her colony in Gloucestershire, and arrived at a new roost in Dorset.

The endangered greater horseshoe bat is a sedentary species and not prone to travelling far from its roost, making this one bat's journey all the more surprising. Although there are rare instances of greater horseshoe bats that have flown even further than this, they have generally been males, which have taken considerably longer to cover the distance - up to two years - to find new colonies to mate with.

The discovery of the young bat has been made by Bristol University PhD research student, Jon Flanders, who is conducting a "Bats in the Landscape Project" on the National Trust's Corfe Castle Estate in Dorset. The bat – which was found at Boar Mill on the Isle of Purbeck - had been ringed at its original location by bat expert Dr Roger Ransome in its roost in Woodchester Mansion in Gloucestershire, one of the few greater horseshoe breeding sites in the country.

Jon Flanders, who is conducting the “Bats in the Landscape Project”, said: " Why this bat chose to travel so far so quickly is a real mystery. One of its biggest challenges in making such a journey would be knowing where to go, as these bats have very short-range echo-location calls (no more than 20 metres) so finding their way to another roost is a considerable feat. This female is too young to start breeding, and we can't link its long journey to climate change - where a bat might fly further north - as this bat was travelling south."

Dr David Bullock, Head of Nature Conservation at The National Trust, said: "Whatever this young bat's motives for its journey, the discovery of its flight has been an extremely lucky event. Only a few out of the hundreds of babies that are tagged are picked up elsewhere. If Dr Ransome had not been tagging the bats at Woodchester, Jon would merely have caught another juvenile bat. Without Jon's work on the Isle of Purbeck, Dr Ransome would have assumed that this bat had died in early foraging flights."

He added: "Nature is always surprising us, so discoveries like this are crucial in helping us to learn more about a species and to use this knowledge in our conservation management plans."

Bats in the Landscape Project

The ‘Bats in the Landscape Project’ is the largest landscape scale UK study into rare bats, including the rare greater horseshoe bat, and was launched in Purbeck, Dorset in 2005. The project will study the roosts, flight patterns, diets, habitats and the influence of farming practices on the greater horseshoe bat and other bats in the Purbeck area.

Jon Flanders is studying for a PhD in the School of Biological Sciences at the University of Bristol.