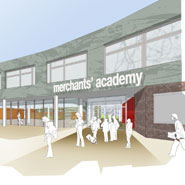 A South Bristol community has cause to celebrate today with the news that the contract to build the Merchants’ Academy Withywood has been signed. The University of Bristol is closely involved in the project.

A South Bristol community has cause to celebrate today with the news that the contract to build the Merchants’ Academy Withywood has been signed. The University of Bristol is closely involved in the project.

Bristol-based Cowlin Construction Limited has won the contract to build the Academy, which will replace Withywood Community School and open in September 2008.

Sponsored by the Society of Merchant Venturers and co-sponsored by the University of Bristol, the Academy will be run by an independent trust. It will be comprehensive in intake, accommodating 910 11- to 16-year olds and 250 sixth-formers. All students attending Withywood Community School when it closes in July 2008 will automatically have a place at the Academy.

The building costs, estimated at £23 million, will be met by the Government and the Society of Merchant Venturers, who jointly signed a funding agreement earlier this year.

Bristol City Council has granted planning consent for the Academy following extensive public consultation. Cowlin Construction and its design team will be developing the detailed design and Capita Symonds has been retained as Project Manager by the Society of Merchant Venturers.

Denis Burn, Chairman of the Academy Trust, said: “Getting the project to this stage has been hard work for the Merchant Venturers and its partners in Withywood, the City Council and the University of Bristol. But now we are within sight of delivering an Academy that will give the young people of Withywood truly outstanding educational opportunities and will have a transforming effect on the area.”

The Academy’s special theme will be Enterprise and Skills. Its other distinguishing features will include:

· the International Baccalaureate (IB) in preference to A-levels for 16- to 19-year-olds, recognising that the IB offers a broad-based and flexible education that is highly regarded by universities and employers;

· a curriculum and approaches to teaching that draw on the University of Bristol’s acknowledged excellence in research and practice in secondary education;

· a clearly articulated set of values, including teamwork, perseverance, aspiration and respect;

· a high quality careers and guidance service, backed up by first-rate links with employers, colleges and universities, to help every student progress to a rewarding job or continue their education;

· state-of-the-art information and communications technology, with the use of computers embedded in the curriculum;

· an on-site Youth Club and an integrated Army Cadet Force that will also be open outside normal school hours and be available to all local young people.

It was announced recently that the Principal of the Academy would be Stephen Kings, who was born in Bristol and taught for 14 years at Withywood Community School. For the past ten years, Mr Kings has been headteacher at Churston Ferrers Grammar School in South Devon, which has enjoyed spectacular success in its Ofsted assessments.

Councillor Jos Clark, Bristol City Council’s Executive Member for Children, said: “The sponsors are serious about attainment, opportunity and raising aspirations in South Bristol. As a councillor who lives and serves in the south of the city, it is very encouraging to see such significant investment in local children’s future.”

Nick Higgs, group chief executive of Cowlin Construction, commented: “We are delighted to have been chosen to work on this important contract. The development of the Academy significantly contributes to the regeneration of South Bristol, something in which Cowlin Construction has been fundamentally involved.

“This project will showcase the expertise we have developed locally in the education sector, adding to a portfolio which includes the £30 million North Bristol school in Redland, the £18 million Filton College and the £16 million development of Fairfield school. Cowlin is very proud to be involved with Merchants’ Academy and we look forward to starting on site shortly.”