Bristol biologist heading for deep waters down under 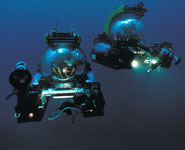 A pair of Deep Rover submersibles

A bathymetric image of the deep waters around Australia's coast

Dr Julian Partridge in the School of Biological Sciences is the lead UK participant in a series of international expeditions to investigate the little-explored deep waters off the coast of Australia.

The project, known as Deep Australia, will feature the first use of manned submersibles to explore these deep waters, which include the outer slope of The Great Barrier Reef and deep sea canyons off the South Australian and West Australian coasts. A specially-equipped vessel will carry researchers from all over the world along with two submersibles capable of diving one kilometre down. The project is being led by the Universities of Queensland and Curtin, the Australian Institute of Marine Science, and museums in Victoria, New South Wales and Queensland. The first expedition should launch in late 2007.

The venture is supported by a grant from the Australian Research Council and matched funds from Deep Ocean Expeditions, who will provide and operate the ship and submersibles.

Dr Partridge, an expert in animal vision, will take part in a number of the expedition’s projects, including an investigation of the physiology of deep sea animals, and particularly how their vision is adapted to perceive bioluminescence – ie light made by other animals. He also plans to deploy a benthic lander (an autonomous vehicle capable of operating to the deep ocean floor that will monitor animals with minimal intrusion). This continues Dr Partridge’s recent collaborative studies of bioluminescence on the floor of the Atlantic Ocean.

‘We only have a very limited idea of what really lives down in the depths around Australia,’ said lead researcher Professor Justin Marshall from the University of Queensland’s Vision Touch and Hearing Research Centre. ‘Previous manned research has relied on divers using rebreathers that only go down maybe 50 to 100 metres.’ He added that the only other opportunities to study life in the deep waters have been provided by dead specimens, such as a giant squid, floating to the surface, or by deep-water trawling expeditions.

The expeditions will be filmed using the latest HD TV cameras in deep-sea housings by both Australian and international TV and cinema documentary filmmakers, potentially including a company closely associated with James Cameron, director of the Hollywood classic Titanic and the IMAX documentary Aliens of the Deep.