Give the ultimate gift this Christmas 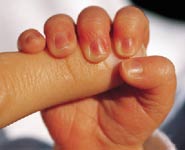 It was late in 2005 when a local press advert caught Sarah’s eye, just as she was looking forward to Christmas with her husband and two children aged four and two at their home near Weston-super-Mare.

It was late in 2005 when a local press advert caught Sarah’s eye, just as she was looking forward to Christmas with her husband and two children aged four and two at their home near Weston-super-Mare.

The ad was from a woman expressing her ‘Christmas wish’ to find an egg donor to help her, and others like her also unable to conceive a baby, by contacting the University of Bristol’s Centre for Reproductive Medicine.

“I’d thought about becoming a donor before, but hadn’t known how to go about it,” says 32 year old Sarah (not her real name), who had spent two anxious years facing uncertainty about her own fertility before finally conceiving naturally. “The ad was just what I needed to take the first step to help other women less fortunate than me. I’ve talked about it in-depth with my husband, family and friends and am now getting ready to donate early in the New Year when my cycle coincides with the recipient’s. I want more people to find out the facts about egg donation and IVF and then take the decision, like me, with the support of their families.”

Women such as Kate (again, not her real name) illustrate vividly the almost indescribable fulfilment and happiness that the gift of egg donation can bring.

“We’d been trying for around six years to have a baby,” says national charity co-ordinator Kate, 45, “and I was referred to the Centre for Reproductive Medicine in 2003. However, my first attempt at IVF had to be delayed when I was diagnosed with a benign brain tumour. It was only once I’d recovered from the operation to remove it nearly eight months later that we felt able to pursue our dream again. The first cycle using one of my eggs unfortunately failed and we were advised that donor eggs were our only real chance.

"After a long wait of nearly two years, we were ecstatic to get the call to say that a donor had been found. Our second cycle using donor eggs was successful and our best Christmas present last year was telling our families on Christmas day that I was pregnant. Our gorgeous baby son was then born in summer 2006. Words can not really convey what this has meant to me and my husband. We are thrilled and grateful to the donor who has changed our lives for ever and we’re now looking forward to our first Christmas as a family.”

Women wishing to give the ultimate gift and help reduce the often lengthy and agonising waiting time for couples like Kate and her partner are invited to contact the Centre of Reproductive Medicine by calling 0117 902 4221.

The Centre for Reproductive Medicine, University of Bristol, welcomes both private and NHS patients and assists with approximately 700 cycles each year.