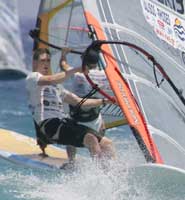 Hugh Sims Williams, aged 23, is the youngest windsurfer in one of the UK’s most successful Olympic teams, Skandia Team GBR. He is also a Youth National Champion. As well as competing in the World Championships, Hugh also hopes he will have the chance to fulfil his dream to compete in the 2012 Olympics in Weymouth.

A challenging test of endurance in a wide variety of conditions Hugh has been busy preparing for this highly competitive event by windsurfing with an ex-world champion in Madeira over the summer.

An avid windsurfer for over a decade, Hugh took up the sport at the age of 11 after a friend introduced him to his local windsurfing club where they practised in the city docks. So enthused by the sport he used to surf a 36-mile round trip to Cardiff, across the Bristol Channel, so he could combine his windsurfing with his work at a windsurfing shop on the other side.

Currently a third-year medical student at the University, his love for adrenaline and ambitious drive also extends to his career where he combines his windsurfing with his other passion to become a doctor. Based at Weston-super-Mare Hospital, Hugh hopes to specialise in emergency medicine in an A & E department treating people in life threatening situations.

Hugh Sims Williams, said: “It is hard balancing both sporting and academic commitments, but I hope that what I learn about performing my best at the big competitions will help me to excel under pressure within my medical career.”

Hugh has been a member of the University’s Advanced Sports Squad for the past three years. The squad helps talented athletes at the University to compete at a high level in sport without sacrificing their academic education.

Windsurfing is one of Britain’s more successful Olympic sports, winning a Bronze medal at the 2004 Athens Olympics, and a Gold and Silver medal at the 2006 European Championships.

Lottery funding and sponsorship from high profile names such as O’Neill, Starboard,Tushingham and Windsurfers World has helped Hugh, and Britain become a strong contender in the sport of windsurfing.

For more information on the World Windsurfing Championships in Italy visit: http://rsx.circolosurftorbole.com/