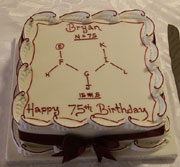 The two mathematicians who posed one of the ‘Millennium’ problems, for which a million dollar prize is offered, will be visiting the University of Bristol on 15 September, 2006.

The two mathematicians who posed one of the ‘Millennium’ problems, for which a million dollar prize is offered, will be visiting the University of Bristol on 15 September.

Professor Bryan Birch and Sir Peter Swinnerton-Dyer will be participating in a conference at the University of Bristol held in honour of Professor Birch’s 75th birthday.

The ‘Birch/Swinnerton-Dyer conjecture’ is one of the six remaining unsolved Millennium problems, for which a million dollar prize is offered to the mathematician who can crack it, by the Clay Mathematics Institute in Boston, USA.

Seven problems were chosen in 2000 as the most significant unsolved problems in mathematics. Announcement came last month that one of the problems – the Poincare conjecture – has been solved, but it rumoured that the mathematician who found its solution, Grigori Perelman, will refuse to accept the million dollar prize. He has already refused the Fields Medal, the mathematician’s equivalent of the Nobel Prize.

The Birch/Swinnerton-Dyer conjecture was first posed back in the 1960s. It has been intensively studied in most of the leading universities across the world. Indeed, long research programmes have been devoted to its study. However, it remains unsolved and is still tantalising mathematicians today.

Professor Elmer Rees from the University’s department of mathematics explained: “The branch of mathematics that studies such problems is called number theory. It has many important applications in modern life from the processing of digital signals for mobile phones and TVs, to the security of PIN numbers.”

Another of the Millennium problems is the Hodge conjecture, named after Sir William Hodge who was a lecturer at the University of Bristol in the 1930s.