Evolution of the penis worm 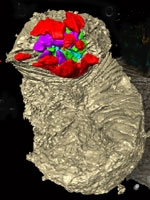 In one instance this has exposed the internal anatomy of the mouth and anus of a close relative of the living penis worm. Another case has revealed a unique pattern for making embryonic worm segments, not seen in any animals living today.

Phil Donoghue, from the University of Bristol, said: “Because of their tiny size and precarious preservation, embryos are the rarest of all fossils. They are just gelatinous balls of cells that rot away within hours. But these fossils are the most precious of all because they contain information about  the evolutionary changes that have occurred in embryos over the past 500 million years.”

This work has enabled the reinterpretation of previous data on fossilised arthropod embryos, showing that they are similar to those found in modern arthropods (insects and crustaceans). This suggests that arthropod evolutionary history must be pushed further back in time than previously thought.

Using SRXTM at the Swiss Light Source of the Paul Scherrer Institute in Switzerland, the team obtained complete three-dimensional images of the fossilised embryos at sub-micrometre resolution. The scans from these experiments are then manipulated in a computer to reconstruct the internal anatomy of the fossil embryos, unlocking the finest details of their preserved anatomy and revealing their hidden secrets.

The present study demonstrates the feasibility of the method for a variety of questions concerning developmental processes in early fossil animals.