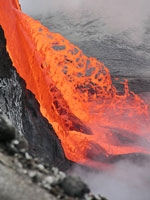 Findings published in Nature help explain a region deep in the Earth’s interior that has puzzled scientists for decades.

Findings published in Nature today (December 15, 2005) help explain a region deep in the Earth’s interior that has puzzled scientists for decades.

This knowledge will aid scientists trying to explain the huge forces deep within the Earth that build, shake and eventually destroy the surface on which we live.

Scientists from the Universities of Bristol, Leeds and UCL (University College London) have collaborated to explore the seismic properties of a new mineral and show how it can explain images of the interior that have hitherto been so enigmatic.

At a depth of nearly 3,000 km below the surface, lies a boundary that separates the rocky part of the Earth (the mantle) from its iron core. This boundary is the last stop for material that has descended into the mantle from the thin layer of crust that we live on. Below the mantle lies circulating liquid iron, which is responsible for the generation of the Earth's magnetic field.

For decades scientists have struggled to understand the properties and behaviour of this region as it could provide insights into the long-term evolution of our planet.

Professor Mike Kendall, from Bristol University, explained: “Because the pressures and temperatures of the Earth’s interior are so great, one of the best ways of imaging the Earth’s interior is by using seismic waves generated by large earthquakes – in much the same way as ultrasound is used to image the body’s interior. But in the past it has been very difficult to interpret these images due to our lack of knowledge about the materials that make up the deep Earth.”

Using methods borrowed from quantum physics, the team recently developed new theoretical techniques for synthesizing what rocks will look like at very high pressures and temperatures. They have used these techniques to study a recently discovered mineral phase at the base of the mantle, which may explain many of the mysteries of this region.

Dr John Brodholt, of the UCL Department of Earth Sciences, said: “For 20 years or more we thought we knew the major minerals in the Earth, but a new mineral has been discovered that completely changes the way we view the deepest parts of the Earth. The discovery of this mineral allows us to understand features of the deep Earth that until now have defied explanation. It is a very exciting time.”

Understanding the properties of this new mineral will allow better interpretations of what happens when cold material thrust into the Earth pools at the base of the mantle in continental-scale regions – such as happens below areas like Sumatra and Japan – and how hot upwellings, originating from the boundary between the iron core and the mantle, feed volcanoes such as those on Hawaii and Iceland.