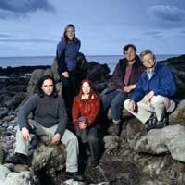 An entertaining and ambitious exploration of the entire UK coastline is the focus of a new 13-part series from the BBC, co-presented by Bristol University experts Dr Mark Horton and Dr Alice Roberts.

An entertaining and ambitious exploration of the entire UK coastline is the focus of a new 13-part series from the BBC, co-presented by Bristol University experts Dr Mark Horton and Dr Alice Roberts.

In 13 programmes, starting on Friday 22 July, Coast celebrates the unique character of the UK's coastal communities, exploring a wealth of fascinating human stories through a mixture of expert comment, contemporary storytelling, stunning air photography and computer-generated images.  This is the coast as it has never been seen before.

Bristol academics Dr Mark Horton, an archaeologist and presenter of Time Flyers, and Dr Alice Roberts, a qualified medical doctor and an expert in anatomy and human bones, will be presenting the series along with Nicholas Crane, a geographer, writer and presenter of BBC Two's Map Man series, Neil Oliver, a journalist and historian who co-presented Two Men in a Trench and Miranda Krestovnikoff, a zoologist and presenter, who is also a Bristol University graduate.

Dr Horton said: "It was a fabulous opportunity to showcase some of our best coastal and maritime heritage, and the modern research that is being undertaken on its geology, ecology, archaeology and history.  We really hope that it will enthuse people to visit our coasts, discover its secrets and help to preserve its unique character."

Dr Roberts said: "Coast has taken me to some amazing places, all around the UK.  I've also met some fascinating and engaging people, and I hope their characters and stories come out in the programme - sometimes it seemed like there was just so much to fit in!

"I've really enjoyed doing the paleoanthropology stories and getting close to our ancestors.  I've been lucky enough to hold a half-million-year-old hand-axe when I visited Norfolk to find out about the earliest humans in Britain, I've held a Mesolithic harpoon that was dropped on the land-bridge that's now under the North Sea, and I stood in 5000 year old footprints on the beach at Formby.

"I've also really enjoyed the challenge of doing 'science on the beach'. We've done some great experiments, which have included meeting up with geologists and chemists to make oil from shale in Dorset, and making alum using shale and human urine (generously supplied by the BBC!) in Yorkshire."

Dr Horton added: "The highlights of filming the series for me include trying not to wreck a very expensive yacht off Hartland Point on the North Devon Coast.  We were filming a wrecking sequence, and while pretending to wreck the yacht, I had to make sure that I wasn't doing any damage to it at all!  I also enjoyed sailing a Bronze Age boat under the Humber Bridge - ancient technology sailing underneath modern technology.  It was a replica boat and was 25 foot long - the planks had been sown together with rope and not a nail in sight.

"We visited many beautiful UK coastal places but my favourite has to be the Severn Estuary at low tide.  The sheer enormity of it all is amazing.  It has the second highest tidal range in the world and watching the tide come in and all the mud and sand become a huge expanse of water is wonderful."

Coast is scheduled for transmission every Friday and Sunday on BBC TWO at 9.00pm from Friday 22 July.

The series is part of the Sea Britain 2005 celebration, which coincides with the 200th anniversary of the Battle of Trafalgar.  It has been made in collaboration with the Open University, and includes 39 "Discover Your Coast walks", some of which can be accessed by mobile phones, including one from Bristol to Clevedon.

The programme on BBC2 on July 24 at 9.00pm will focus on South West England, travelling from Exmouth to Bristol.

A book to accompany the series, also entitled Coast, is published by BBC Books on 14 July.