The Afterlife of the Hollywood Western 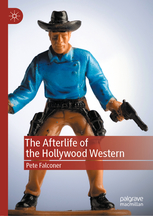 This book examines the Western genre in the period since Westerns ceased to be a regular feature of Hollywood filmmaking. For most of the 20th Century, the Western was a major American genre. The production of Westerns decreased in the 1960s and 1970s; by the 1980s, it was apparent that the genre occupied a less prominent position in popular culture.

After an extended period as one of the most prolific Hollywood genres, the Western entered its “afterlife”.What does it now mean for a Hollywood movie to be a Western, and how does this compare to the ways in which the genre has been understood at other points in its history? This book considers the conditions in which the Western has found itself since the 1980s, the latter-day associations that the genre has acquired and the strategies that more recent Westerns have developed in response to their changed context.