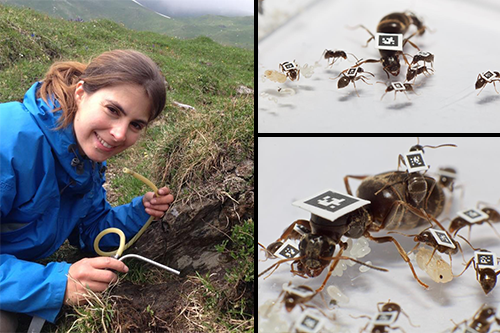 Humans are not the only species to socially distance when disease hits their community, research from the University of Bristol reveals.

Dr Stroeymeyt used advanced computer software to track hundreds of ants, comparing their movements when some in the group were infected.

The University of Bristol scientist found that once exposed to a fungal disease, contaminated ants spend less time inside the nest where they might transmit infection. They also increase the distance between themselves and healthy ants in order to combat the spread of the disease.

She showcased her work on Chris Packham’s Animal Einsteins, which is now available on BBC iPlayer. The six-part series was produced by BBC Studios’ Natural History Unit (NHU), based on Whiteladies Road, Bristol.

Dr Stroeymeyt said: “Ants have evolved extremely quick and effective responses to infectious pathogens, which greatly reduce the risk of epidemic spread within their colonies.

“By reorganising their social network within hours of the first contact with the pathogen, they minimise the risk that anybody will become seriously ill with the disease and minimise the routes of transmission to the queen and young workers, which are most important to the long-term success of the colony.

“Interestingly the social distancing we observed was not only between contaminated and healthy individuals, but also among healthy ants themselves – which suggests that pro-active social distancing, such as what we have been doing over the past few months, may be more widespread than previously thought.”

The research by Dr Stroeymeyt was also published in a review article about social distancing in animals in Science Magazine this week.

This review shows that many animals use self-isolation, quarantining and avoidance of infectious individuals as strategies to avoid disease transmission in social groups.

Chris Packham said: “What’s interesting is with ants, when an individual ant is infected with the fungus, within a couple of days it becomes ill, and something in the ant triggers at that point when it becomes ill, it recognises that it’s ill, and it’s that which motivates its change in behaviour.

"You always think of an ant as a tiny organism with a tiny brain, but it appears that they are making individual decisions to protect the whole colony which is remarkable.

“I think in contemporary times there are real parallels here, in the sense that, they’re protecting their young ants and their future, they’re investing through changes to their own behaviour and making sacrifices to ensure the survival of the colony. And that’s surely what we have been doing throughout the pandemic.

“It’s not about us as individuals, it’s about looking after those other people around us - our communities, and protecting our families, and that’s what so many people have been doing. So I think there are very clear parallels between this.”

Chris Packham’s Animal Einsteins continues on Sunday 21 March at 8pm on BBC Two, with episodes one to four now available on BBC iPlayer.