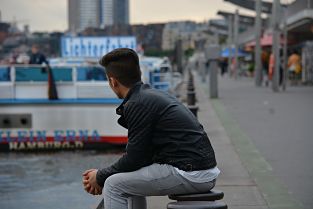 A new report launched this month seeks to identify the societal harms in seeking asylum and the key barriers to support.

For people seeking asylum in Northern Europe, reaching a safe country is a key goal. However, many face unexpected and unduly harsh realities: poverty, poor healthcare, racism and Islamophobia can make life incredibly difficult. This raises serious ethical concerns. Rather than accessing rights, many people experience the degeneration of their mental health, loss of job-related skills as time goes on, and social isolation. Survivors of violence and persecution are often excluded from support networks. Likewise, some policies and social attitudes are increasingly hostile toward migrants, resulting in harmful laws and practices.

The new study, led by Dr Vicky Canning, Senior Lecturer in Criminology in the School for Policy Studies, was based in Britain, Denmark and Sweden between 2016-2018, and documents the harms increasingly embedded in the lives of people seeking asylum. In particular, this study focuses on the gendered implications of seeking asylum. It highlights that hostile attitudes and environments compound – or make worse – the impacts of violence, torture and sexual abuse. At the same time social and psychological support is reduced, leaving many people in an unsupported limbo, and women survivors of violence on the periphery of societies.

Last week also saw the launch of a new tool to understand and address the harms embedded in the UK asylum system in the form of the interactive Right to Remain Asylum Navigation board produced in collaboration with Lisa Matthews from Right to Remain. Participants can learn about what people going through the system and those supporting them can do to be in a better position. As the counter moves around the board, participants can pick up Information Cards which outline what that stage of the process is, and how it can be navigated.

Read more about the background to this research project in this blog written by Victoria Canning with Lisa Matthews.