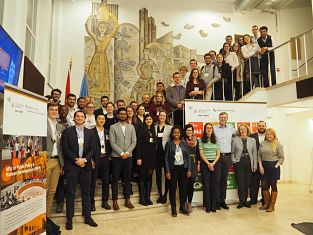 The simulation teams based in Maastricht. 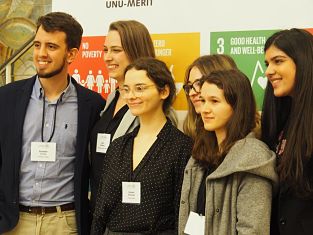 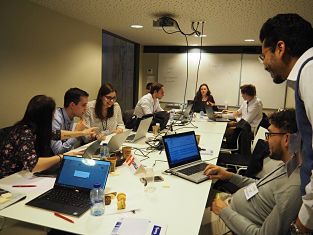 Students at work during the simulation.

The NASPAA-Batten Student Simulation Competition is a day-long event, held annually, that allows graduate students in public policy and related fields to test their skills on real-world data.

This year, nearly 600 students from 147 universities in 27 countries were chosen to take part in the NASPAA-Batten Student Simulation Competition, which saw participants compete at 11 global host sites from Dhaka and Cairo to Mexico City and San Francisco.

Participating on behalf of the School for Policy Studies were current MSc Public Policy students, Cealach McKeating and Cristofer Correia who travelled to Masstricht to compete.

First held in 2015, the competition is designed to support and encourage more experiential learning in the classroom, specifically in the realm of public policy and administration education.

The concept behind the 2019 Simulation was to act as the nation’s Cabinet in response to a ficitious migrant crisis. Using software developed for the competition by the Center for Leadership Simulation and Gaming, student teams took on cabinet-level positions of a virtual country. The simulation software then processed the decisions made by the team to see how their policies affected their citizens, their economy, and the migrants themselves.

Public Policy student Cellach noted “The central conceit was that the policy response from governments was limited by the attitudes of their electorate and previous policy commitments, so we would have to be creative to implement policies which would, over time, improve the metrics of our country.”

In total, there were 116 competing teams judged on simulation scores, negotiation skills, and policy presentations. As part of the evaluation process, teams were also expected to produce a policy memo and presentation. View the winning presentations here.

On participating in the event, Cealach said; “It was a pleasure to go to Maastricht and to be hosted by UNU Merit and CEU. In a testament to the value of collaboration, Cristofer and I were members of a six-person team who came from five countries over two continents, bringing a wealth of personal experiences and knowledge.”

Cealach continued, “Our teammates from Bucharest, for instance, gave a much-needed insight into the nuances of migration policy in Romania, a perspective we hadn’t considered in any great detail before, but which taught us a great deal about the social, political, and cultural dynamics at play throughout the European Union.”

Network of Schools of Public Policy, Affairs, and Administration or NASPAA is the global standard in public service education. It is the membership organization of graduate education programs in public policy, public affairs, public administration, and public & nonprofit management. Its over 300 members – located across the U.S. and in 24 countries around the globe – award MPA, MPP, MPAff, and similar degrees. The NASPAA run the annual competition with The Frank Batten School of Leadership and Public Policy.