As part of an EU-funded research project hosted by the German Department at the University of Bristol, we invite translations of extracts from some of Ernst Jünger’s travel writings. Attractive prizes will be awarded to FOUR winning entries, with one category limited to entries from current undergraduate students. The aim is to promote the study of Ernst Jünger’s works in English. The deadline for submission of entries is 1 July 2013. 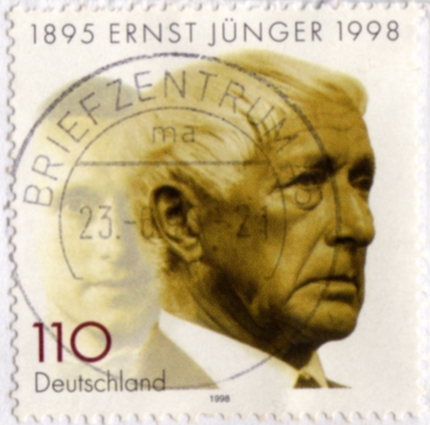 As part of an EU-funded research project hosted by the German Department at the University of Bristol, we invite translations of extracts from some of Ernst Jünger’s travel writings. Prize money will be given to FOUR entries, with one category limited to entries from current undergraduate students, and numerous book prizes will also be awarded.  The aim is to promote the study of Ernst Jünger’s works in English. The deadline for submission of entries is 1 July 2013.

Please contact Dr Christophe Fricker (christophe.fricker@bristol.ac.uk) if you have any questions.

Ernst Jünger (1895-1998) was one of the most significant writers and thinkers of 20th-century Europe, and is one of the most controversial. He became famous with the publication in 1920 of In Stahl­gewittern [Storm of Steel], an account of his experiences in the trenches in the First World War. In the following eight decades, Jünger published more than fifty works, including diaries, novels, stories and essays. His novella Auf den Marmorklippen [On the Marble Cliffs, 1939] is a thinly veiled critique of the Nazi regime. Tributes by writers of international stature (including Jorge Luis Borges, Bruce Chatwin, and Heiner Müller), as well as visits from European heads of state and government (such as François Mitterrand, Roman Herzog, Helmut Kohl, and Felipe González) have helped secure Jünger a prominent place in intellectual debates across Europe.

Jünger is a citizen of the world as well as a European and visited virtually every corner of the world. Volume 6 of his Sämtliche Werke (published with Klett-Cotta) includes diaries of some of his numerous trips to Sardinia and neighbouring islands as well as accounts of journeys to Brazil, Antibes, Rhodes, and Spitzbergen. Later diaries record trips to South, South East, and East Asia as well as the Sudan, Angola, Liberia, the Seychelles, and Mauritius. Extensive diaries exist also of visits to other Mediterranean sites, including Crete, Morocco, Sicily, and Cyprus.

Through this translation competition, we would like to address two deficiencies in Jünger studies. First, very few of Jünger’s works have been translated into English; and second, Jünger’s travel writings have received comparatively little scholarly attention even in Germany.

The competition is timely given as Jünger is becoming the subject of increasing public and scholarly attention. Jünger is emerging as a hidden ancestor of contemporary theoretical and societal discus­sions. Calls for a fundamental re-evaluation of Jünger’s writing have been issued. Two extensive biographies were widely reviewed by the German press in 2007 and have also been commercially successful. Expert and popular audiences across Europe have become part of this development. Ever since the early 1930s until the end of his long life, Jünger made every attempt to explore commonalities and bridge differences between various global cultures.

Undergraduate prize (for current undergraduates at any university, including 2013 graduates): £100