Over what distances do volcanoes interact? 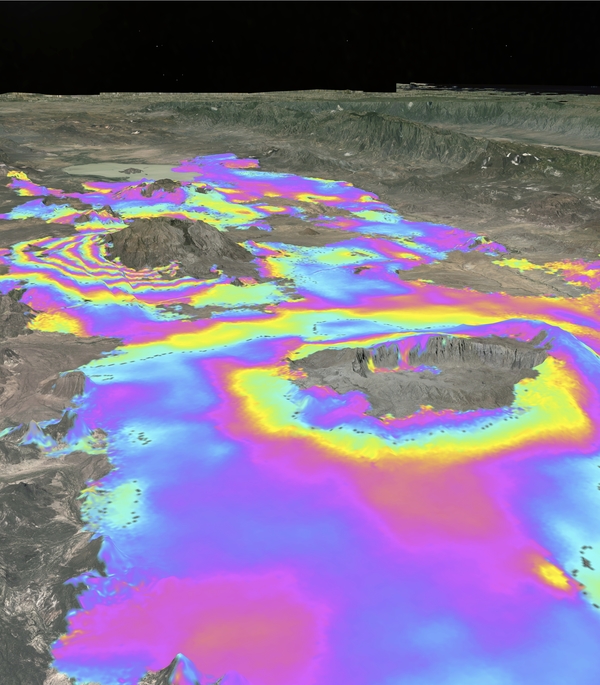 In the geological past, large eruptions have often occurred simultaneously at nearby volcanoes. A team of Cabot Institute scientists from the University of Bristol are using satellite imagery to investigate the distances over which restless magmatic plumbing systems interact.

In a study published in the journal Nature Geoscience, the scientists use deformation maps from the Kenyan Rift to monitor pressure changes in a sequence of small magma lenses beneath a single volcano. Importantly, they find that active magma systems were not disturbed beneath neighboring volcanoes less than 15 km away.

The lead author, Dr Juliet Biggs, explained: “Our satellite data shows that unrest in Kenya was restricted to an individual system. Inter-bedded ash layers at these same volcanoes, however, tell us that they have erupted synchronously in the geological past. This was our first hint to compare observations of lateral interactions based on recent geophysical measurements with those from petrological analyses of much older eruptions.

The team, which includes a recently graduated PhD student Elspeth Robertson and Bristol’s Head of Volcanology Professor Kathy Cashman, took this opportunity to compare observations from around the world with simple scaling laws based on potential interaction mechanisms. They found that stress changes from very large eruptions could influence volcanoes over distances of up to 50 km, but that smaller pressure changes associated with unrest require a different mechanism to explain the interactions.

Professor Cashman explained ‘Volcanology is undergoing a scientific revolution right now – the concept of a large vat of liquid magma beneath a volcano is being replaced by that of a crystalline mush that contains a network of melt or gas lenses. The interactions patterns observed in Kenya support this view, and help to constrain the geometry and location of individual melt and gas lenses".

The study was funded by two major NERC projects: COMET, a world-leading research centre focusing on tectonic and volcanic processes using Earth observation techniques; and RiftVolc, which is studying the past, present and future behavior of volcanoes in the East African Rift.

The research paper, The lateral extent of volcanic interactions during unrest and eruption, was published online in Nature Geoscience on 15 February 2016.  DOI 10.1038/ngeo2658.