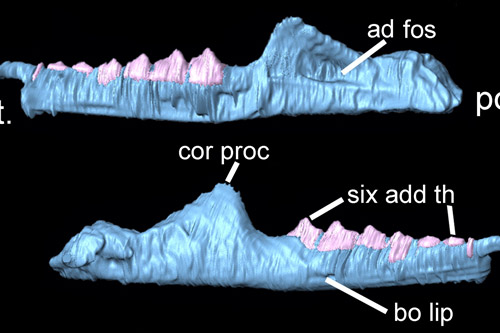 The jaw of the new species Clevosaurus cambrica, here shown as a 3D CT scan model, was adapted for chopping up small prey University of Bristol

Fossils found in a quarry near Cardiff in South Wales have been identified by a student and her supervisors at the University of Bristol as a new small species of reptile that lived 205 million years ago.

It is named Clevosaurus cambrica, the second part being Latin and referring to the fact it comes from Wales.

The research was completed by Emily Keeble, an undergraduate in Bristol's School of Earth Sciences, as part of her final-year project for her palaeontology degree.

The fossils she studied were collected in the 1950s in Pant-y-ffynnon Quarry, and they belong to a new species of the 'Gloucester lizard' Clevosaurus (named in 1939 after Clevum, the Latin name for Gloucester).

In the Late Triassic, the hills of South Wales and the South West of England formed an archipelago that was inhabited by small dinosaurs and relatives of the Tuatara, a reptilian living fossil from New Zealand.

The limestone quarries of the region have many caves or fissures containing sediments filled with the bones of abundant small reptile species that give us a unique insight into the animals that scuttled at the feet of the dinosaurs.  The fissures are of worldwide importance in yielding such well-preserved small reptiles.

Emily said: "The new species, Clevosaurus cambrica lived side-by-side with a small dinosaur, Pantydraco, and an early crocodile-like animal, Terrestrisuchus. We compared it with other examples of Clevosaurus from locations around Bristol and South Gloucestershire, but our new beast is quite different in the arrangement of its teeth."

Professor Mike Benton, Emily’s co-supervisor, added: "We were lucky to find quite a lot of the skeleton and Emily was able to scan the blocks and make 3D reconstructions of the skull, neck, shoulder and arm region."

Another co-supervisor, Dr David Whiteside, said: "The teeth of Clevosaurus cambric were likely adapted to dice pieces of flesh, so we interpret this little critter as a predator, feeding on insects and other small animals."

Pant-y-Fynnon Quarry, near Ogmore and Ewenny, has long been quarried as a source of limestone for building and road surfacing, and the fossils come from cracks or fissures filled with younger, red-coloured sediments.

The animals were living on the high points of the islands, and many of them seem to be quite small, possible evidence for island dwarfing – which has been seen in more recent examples.

Dr Whiteside added: "The dinosaurs, crocodiles, and lizards were isolated to some extent on their islands, and perhaps smaller ones were better at surviving in the changed ecologies of the islands."

‘The terrestrial fauna of the Late Triassic Pant-y-ffynnon Quarry fissures, South Wales, UK and a new species of Clevosaurus (Lepidosauria: Rhynchocephalia)’ by Keeble et al in Proceedings of the Geologists’ Association.