Birds of a feather flock together to confuse potential predators 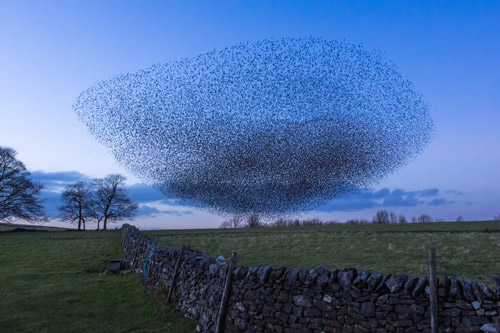 A mumeration of starlings Benedict Hogan - University of Bristol 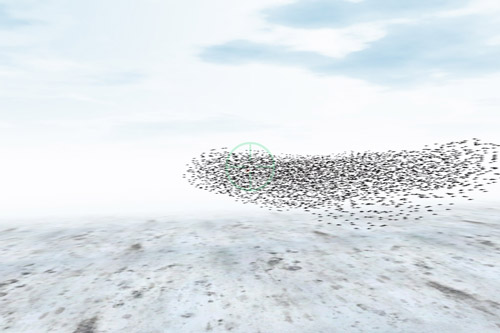 Scientists from the Universities of Bristol and Groningen, in The Netherlands, have created a computer game style experiment which sheds new light on the reasons why starlings flock in massive swirling groups over wintering grounds.

A mumeration can hold many thousands of starlings but the reasons why they put on these amazing displays are not well understood.

However, scientists have observed that flocks of starlings are larger, and more densely packed in areas with more predators, such as hawks, and that attacks by such predators are less likely to succeed against larger groups of starlings. This has led researchers to suggest that one function of these flocks may be avoiding predation.

There are many ways in which forming groups can reduce predation. One idea is that in larger groups, more birds can be on the look-out for predators at any one time, and there is even evidence that larger groups can allow for faster transfer of information. For example, if one bird sees a predator it might turn to escape, causing other birds to turn, even if they have not seen the predator themselves.

Another suggestion is that predators may simply be confused by the sheer number of potential prey, something called the “confusion effect”. The confusion effect is well documented in several species and describes decreased predator attack success with increased prey group size.

Benedict Hogan, a PhD student based at the School of Biological Sciences in Bristol, explained: "Testing these theories is difficult in the wild, so we traded hawks for human participants, and made a computer game style experiment, where the participant attempts to fly in and catch one target starling in a flock of up to 5,000 simulated starlings."

The confusion effect is often discussed when considering the causes of large and complex groups like those of starlings and shoals of fish, but there is little empirical evidence that these groups induce predator confusion, indeed most evidence for confusion comes from experiments with very small groups (less than 10).

Benedict added: "What we aimed to do was to find out whether or not confusion does occur in these massive and complex aggregations, like those of starlings.

"We found that, in line with the predictions of the confusion effect, participants had more difficulty in capturing a target starling in larger flocks, and in denser flocks; and that these effects interacted.

"This means we have evidence that suggests that starlings could indeed be safer from predation in larger and denser flocks, through the confusion of predators.

"However, it is likely that predator confusion is only one of many functions of these impressive groups in starlings.

"Computerised experiments like this may allow us to test other potential functions in starling groups, and similar simulations may help others to understand the mechanisms and functions of complex groups in other species."